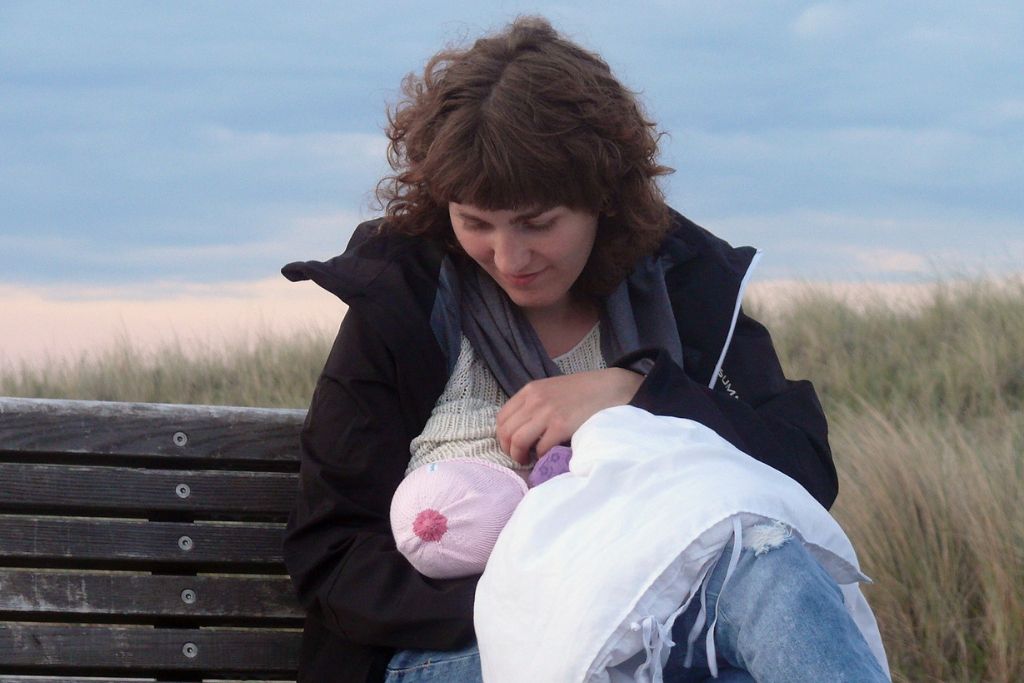 At a first glance, breastfeeding in Germany should be a breeze. Every mother is entitled to a midwife who visits her at home for the first 8 weeks postpartum. If you wish, she can consult you as long as you continue breastfeeding. And, if there are breastfeeding issues that the midwife hasn’t been able to help with, most insurances will cover a consultation with a lactation specialist.

On top of that, nursing in public is widely accepted. I’ve seen women breastfeed in cafes and restaurants, public parks and swimming pools, on buses and street corners. The only comments I’ve heard myself have been positive, but mostly people pay no attention and make no remarks.

However, if you look at the stats, also here in Germany the breastfeeding journey is anything but easy. According to one study, around 90% of women in Germany attempt to breastfeed once their baby is born. After the age of 2 months 70% of babies continue to be breastfed, whereas by the age of 6 months the proportion has dropped to 40 to 50%. Another study found that the average length of breastfeeding in Germany is 6,9 months, 92% of mothers have stopped breastfeeding by their child’s first birthday.

According to a study done by Lansinoh Laboratories, Inc. that in 2014 surveyed 13 000 moms in 9 countries, German moms found the pain associated with breastfeeding (38%), the frequency of feeding (34%), and waking up in the middle of the night (32%) to be the most challenging parts of breastfeeding.

Fortunately German midwives have quite a few tricks up their sleeve to help mothers who want to breastfeed in spite of challenges along the way.

A little help for breastfeeding

During one of the sessions of my birth class, the midwife in charge decided to do a little game. She put a variety of postpartum and baby items in a sack and made us pass it around. Everyone had to pull out one item without looking, tell about it, and the others could comment. Once it was my turn, I pulled out a little round object that I recognized to be a nursing pad. I said as much and commented that I have never tried one of these reusable ones.

The midwife chimed in that they really are quite wonderful, and the wool ones are the best. They keep warm, and help to prevent plugged ducts and mastitis. And, once you’re done with them, they’re pretty good for fighting diaper rash!

Her explanation got me interested in trying wool nursing pads. In addition to the other benefits, it sounded like a good alternative to the piles of trash created by boxes upon boxes of the disposable kind. Quite conveniently, just a few weeks later I was approached by the Danish company LANACare who offered me to try out their nursing pads made from organic merino wool.

Disclaimer: I received free samples of LANACare nursing pads and breast cream in exchange for writing a review on Let the Journey Begin. All views are my own.

LANACare sent me two sets of their organic merino wool nursing pads. The description on the package sounded almost too good to be true. Merino wool is supposed to be perfect for absorbing moisture but never feels wet. It keeps warm and thus stimulates circulation meanwhile allowing the skin to breathe. Whereas the high lanolin content of the wool detains bacteria and soothes any soreness.

“Let’s see how it works in practice,” I thought to myself, packed them in my hospital bag.

I unpacked them again as soon as I got out of my first postpartum shower at the hospital, and put them to work.

I don’t know how much difference the wool nursing pads have made, but breastfeeding has certainly been even easier the second time around. My milk came in faster, sparing us a longer hospital stay due to newborn jaundice. I was spared most of the first week and month troubles like soreness, pains, or plugged ducts. In fact, it has been going so well that I have mainly used the LANACare breast cream as a lip balm (works great, by the way).

The nursing pads are especially great for the first couple of months while your body is trying to figure out the whole supply and demand thing. They also work better than anything else in the night. They are hygienic, soft and comfortable to wear, even in warm weather. Although theoretically two sets of pads should be enough for the entire duration of breastfeeding, I’m not very good at washing them regularly so three would be the optimal number for me.

Speaking of washing, I was a little unsure how well I would do with handwashing wool on a daily basis. As it turns out, it really is quite simple and fast – wash in lukewarm water, rinse, press out excess liquid with a towel, then dry on a lukewarm heater. That said, the last step turned out to be a little complicated in the summer. Who turns on a heater when it’s +30 C outside? Long story short, I ended up using them interchangeably with disposable nursing pads.

All in all, the merino wool nursing pads are definitely a good investment, especially for the colder part of the year. If you breastfeed long, they might even be cheaper than the disposable ones: a set of LANACare pads costs 12 euros, whereas disposable nursing pads typically cost around 5 euros a month. One final word of advice: if you do buy them, get also the lanolin soap for washing. It’s almost impossible to find elsewhere!