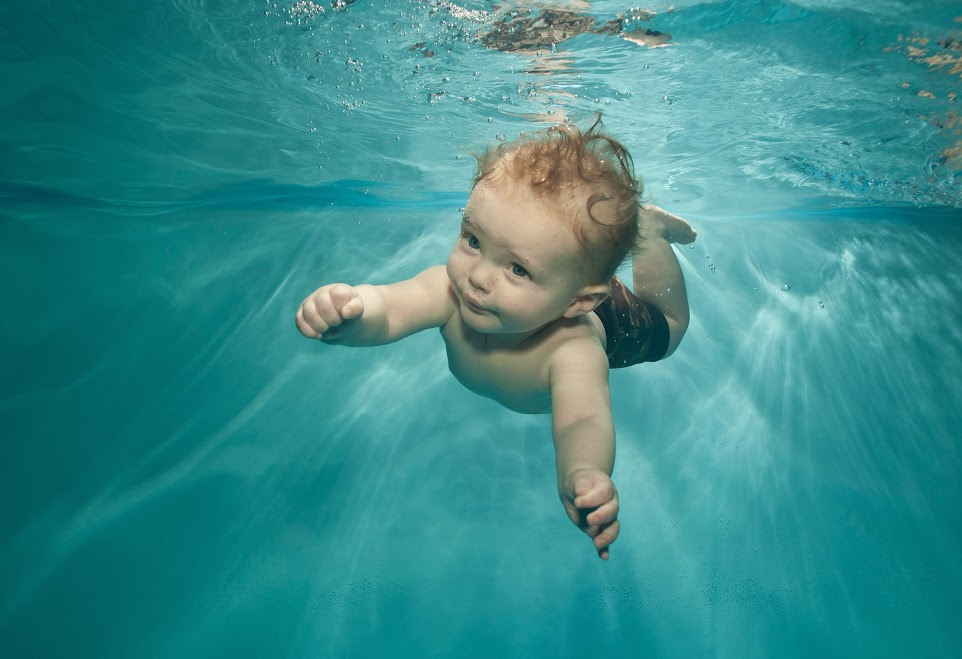 “I had a feeling that he’s the wellness type” commented my midwife as we were massaging a week old Bamm-Bamm after his first bath. My son hadn’t made a sound of complaint during the bathtime and was now visibly paying attention to each body part that I was carefully massaging with baby oil. His enjoyment of water was confirmed the first time we took him to the swimming pool. He may have been just eight weeks old but he was handling it like a pro.

Love for water must be running in the family as his big sister was no different. We were considering doing a baby swimming class with Birdy but, back then, it sounded much too complicated. I mean, how do you get dressed and showered with a baby who cannot sit yet? Furthermore, the idea of submerging my tiny baby under water freaked me out.

This time around I decided that my insecurities shouldn’t overrule my baby’s love for all things water. Plus I should be older, wiser, and more experienced in the baby business, right? Long story short, I booked Bamm-Bamm a baby swimming class that would start as he turns three months old.

On a sunny August morning it was time for our very first baby swimming class. While Bamm-Bamm napped, I packed our things, showered, and put my bathing suit on. This way I would need little time for myself and could focus on getting the little one ready for swimming. Once I was done I carefully transferred the sleeping baby to the baby carrier, and off we went.

I was pretty proud of myself for being so good in time, we entered the lagoon-like room where baby swimming takes place 10 minutes early. At which point I discovered that we were among the last to arrive. When it comes to the Germans some stereotypes are fulfilled every time! I let Bamm-Bamm look around for a little while, and in the pool we went. He loved the warm water and, as I laid him on his back, holding his head, to let him move his arms and legs in the water, he started laughing with excitement.

Remember my fears of submerging the baby under water? Turns out that the instructor doesn’t support this practice (whew!), the class if filled by songs, games, and play with all sorts of objects. The babies are certainly not learning to swim! The goal is to simply let them explore water, moving in water, and playing with water. Especially the older babies found it fascinating to splash around, chase floating balls, or balance on water mats.

For the most part, Bamm-Bamm was happy to just swim around. I tried out the various activities with him but, if he showed little interest in it, I just let him move in the water at his own pace. We also didn’t stay until the end of the class, half an hour in water with all the other babies, noise, and new sensations is enough stimulation for someone so young. We left the pool at his first signs of tiredness which had the nice side effect of beating the post-swimming dressing room crowd.

Oh, and my worries about showering and dressing myself and the baby after swimming? Turns out that it’s not that difficult after all. The swimming pool has special, bathtub-like sinks for washing the babies. And I had a nice long shower at home while my tired son was having a good long nap.

The four weeks of baby swimming were a lot of fun. And they taught me that the tried and tested principles from the baby class days with Birdy apply to baby swimming as well:

Bamm-Bamm and I are making a swimming pause at the moment as we’re busy with some other activities (more on that later!). We will continue baby swimming in November and in the meantime we compensate by long baths in the big tub.

Find out more about Hamburg’s “parent schools” in the post about a special kind of breakfast Parent Café: Coffee and Music Included.

Learn about the German approach to starting daycare in the post Birdy Goes to Kindergarten.