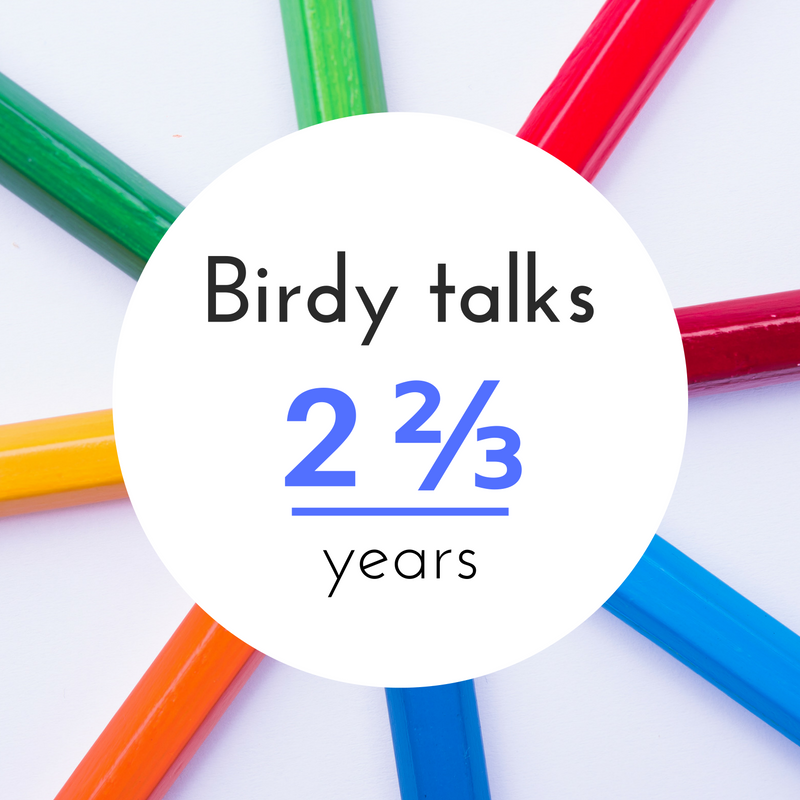 Last time I took stock of Birdy’s language progress almost 6 months ago. It may not sound like much but a half year makes a world of difference for a budding speaker!

If you asked me which language is currently Birdy’s strongest – German or Latvian – I couldn’t tell. I’m often surprised about the way she can express herself in German, whereas hubby is just as often impressed by her Latvian and claims that she makes more complex sentences. Be that as it may, she can now easily make complete sentences in both languages consisting of around 4-6 words.

Interestingly, I have also noticed the first signs of language specialization – the richness of her vocabulary in each language depends on the situation and topic. For instance, her football playing language is definitely German.

Birdy certainly has no trouble switching between the languages. Within the same conversation she will switch between speaking German to her dad, Latvian to me, and babbling to her brother. Apparently also the little one should be addressed in the language that he understands best!

Over the past six months Birdy has made a lot of progress in learning German articles and Latvian conjugation. Of course, she still makes mistakes but I’m starting to suspect that, a year from now, she’ll be correcting my guesswork of German articles. Funnily, she uses the German article “eine” as a filler word in Latvian, usually while looking for words when trying to compose a longer sentence.

She has figured out the use of personal pronouns (me, you, mine, yours), can count until 10, and is learning shapes. She’s getting better and better at positional and directional words (above, under, before, after etc.) making it easier to send her on errands to find something.

Birdy sometimes still uses words that she’s made herself. For example, in Latvian she calls kitchen “virtaba” instead of “virtuve“, likely because it’s the only room that has a different word ending than the rest (“room” in Latvian is “istaba“). The fairly long Latvian goodnight – “ar labunakti” – she adorably abbreviates to “abuk” even though she can say it correctly. And, for reasons unknown, she calls pretzel sticks “naki“. It’s quite far from either the German (Salzstangen) or the Latvian (sālsstandziņas) but it just rolls of the tongue so we’ve begun using the word as well.

Language as a mirror

All in all, Birdy’s favorite phrases in both languages are a great reflection of toddlerhood. She loves to say “ich mache das alleine!” (I’ll do it myself) and “lass das!” (don’t do that), or “negribu, nepatīk!” (I don’t want, I don’t like). When asked to come over, she often announces “Ich bin noch nicht fertig” or “es vēl nepabeidzu” (I’m not done yet) and continues playing.

That said, she can be just as good about asking for help or asking for a hug.

We also see the first signs of the upcoming age of questions. Birdy often wants to know “was war das?” (what was that?) or “kas tā par skaņu?” (what’s that sound?). On the other hand, since she has learned to say “es nezinu” (I don’t know) it’s often the automatic reply to the questions that we ask her.

Over the last months Birdy has started to use more German words when speaking to me. Most likely, this is a consequence to her speaking more and more German at the daycare, learning to play with other kids, and making her first friends.

Accordingly, I’m not getting too upset about it. If she says something in German to me, I ask how mommy says it or repeat it in Latvian, and we carry on. After all, if she’s in her play kitchen cooking, turns around and asks “Wer möchte Soße?” (who wants sauce?) her use of German has less to do with me and more to do with her processing a situation experienced at the daycare.

We’re about to spend over a month in Latvia, and I’m excited to see how the change of the language balance will impact Birdy’s speech. Stay tuned!

If you found this interesting, check out also these posts about Birdy’s language development and the challenges along the way: