I suppose me diving into multilingualism literature was only a matter of time. After all, numerous years in sociological research have left their consequences, one of them being a tendency to extensively read up on topics that interest me. Be that as it may, until now I had only briefly checked out some research evidence about the effects of multilingual upbringing on young children (but that’s a topic for another post). It was time for some more “practical” reading! 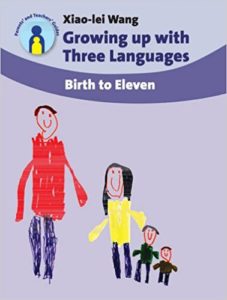 This book appealed to me for two reasons. First, Xiao-lei is a mother of two trilingual boys and she has over a decade of experience of raising children multilingually: she is Chinese, her husband is Swiss, and the family lives in the US.

Second, she is a scientist with a background in linguistics and psychology which can be felt throughout the book: it is a small scale, in-depth, longitudinal study of her two son’s first decade of life. She puts her observations and parenting strategies in the context of relevant research literature, meanwhile keeping her style of writing easy to read and highly accessible for any reader.

“Growing Up With Three Languages” is structured in seven chapters:

Did I like the book? My short answer is yes. If you’re interested in the long answer, continue reading.

The author brings to the forefront many topics that seemed self-explanatory and logical to me once I’d read them but to which I hadn’t paid much thought to. For example, language mixing should not be seen as a bad thing, quite the opposite – it often demonstrates multilingual competence and can be used for multiple communicative purposes.

She raises many interesting (and important) questions regarding raising a child with a heritage language but outside the cultural context of this language. For example, should you also teach them swearwords? After all, they are a vital part of any language! Or, if you’re a mother raising a son, how do you make sure that he doesn’t acquire a “sissy” version of your language? Women and men do tend to use different styles of expression.

The author focuses on identity and personality development of the children and also includes her sons’ own views about their trilingual upbringing. This perspective was not only fascinating to read, but it also reminds of the bigger picture:  when raising kids with multiple languages one should not forget that they should also be raised to be happy and well-adjusted individuals.

Although Xiao-lei makes it clear that she and her husband have been successful in raising their sons to be fluent in three languages, including being able to read and write in all of them, she also doesn’t hide the fact that this outcome is the result of a lot of conscious effort and hasn’t come easy. Not giving up requires perseverance, patience, as well as consistency.

Is this book for you?

If you’re looking for a foolproof guide for raising your kids in three languages this book is NOT for you. Rather, it is suited for what Xiao-lei calls “reflexive parenting”: it brings to the forefront issues that you might want to consider and gives plenty of examples and strategies. It is up to you to decide whether these particular issues and strategies fit your situation and whether they are something that you want to implement.

“Growing Up With Three Languages”  can help parents who want to raise their children with three languages to reflect about their situation and gives ideas for specific methods and practices that can be adapted to their particular situation.

Book Review: “Bringing up a Bilingual Child” by Rita Rosenback