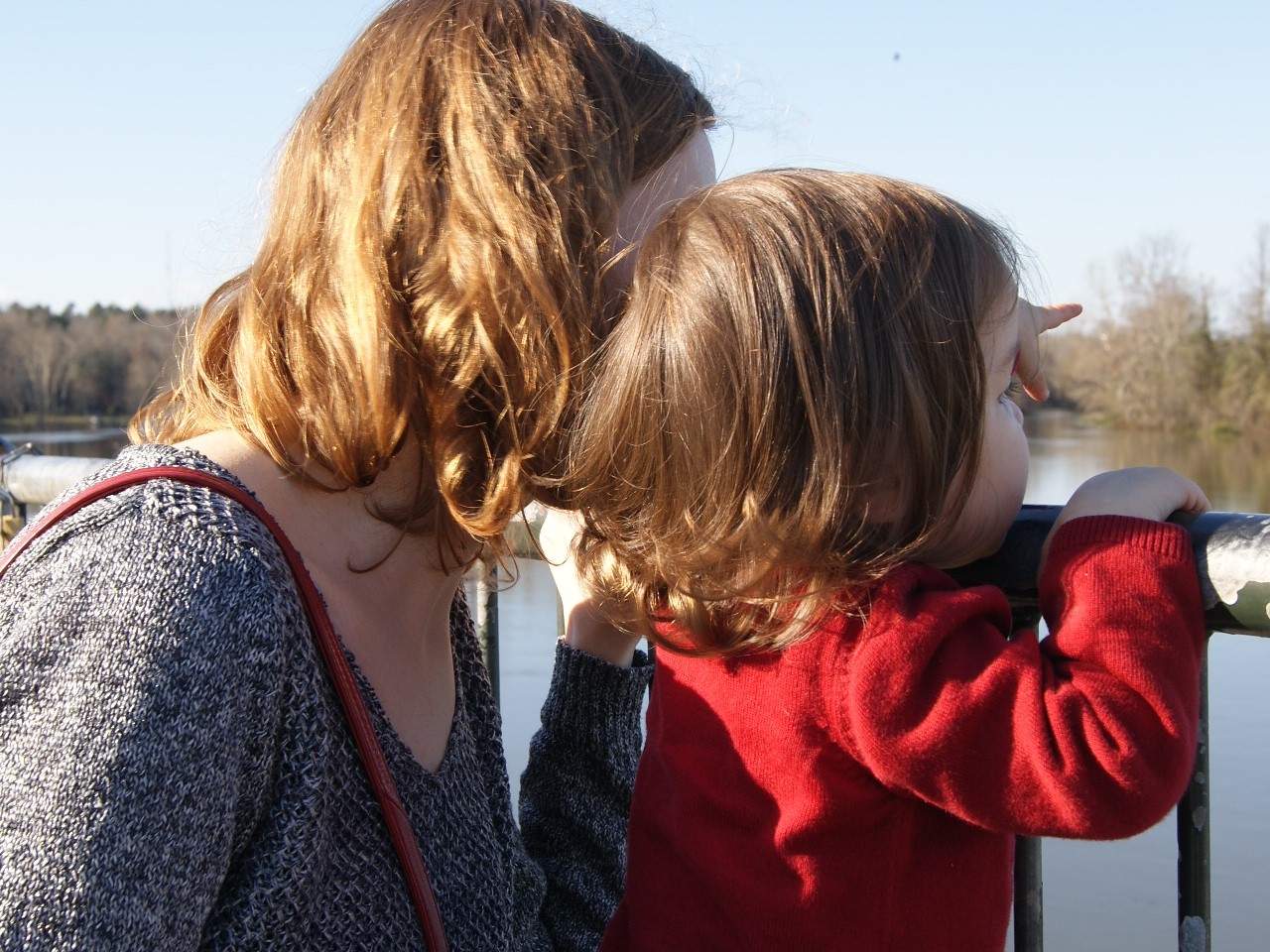 It’s been a tough fortnight in our house – first Birdy came down with obstructive bronchitis that left her cranky and immobile for several days, then hubby and I caught the virus as well. Long story short, two weeks, a pile of empty medicine bottles, and mountains of used tissues later, the other two family members have recovered while I’m left battling what feels like the worst cold I’ve had in a decade.

As the fog in my brain is starting to clear, this is probably as good time as any to look back at our most recent family trip to the warm Southern USA back in December. Our vacation was not very long and we were pretty busy with our friends’ wedding (American weddings are definitely more time consuming than German or Latvian ones!) but we did manage to do some exploring and sightseeing.

Today’s post is about things we enjoyed in and around Augusta, Georgia where the wedding took place. Stay tuned for the second part about Georgia’s capital Atlanta!

To give a little background info for those of you who (like me) have little idea about US geography, the city of Augusta is located in the Southeast of the country. It lies by the river Savannah, on the border border between the states of Georgia and South Carolina. Augusta was founded in the 18th century and prospered as a market town because of its convenient location: it’s at the end of the navigable waterway of Savannah River, connected to one of the first railway lines, and surrounded by large cotton plantations. Today Augusta has roughly 200 000 inhabitants and is probably best known for hosting the famous Masters golf tournament.

As we were fortunate to have exceptional weather for the entire stay, we spent most of our free time outdoors tanking up some sun and getting our toddler plenty of fresh air. I’ve heard that Augusta has lovely art and history museums but we didn’t visit a single one. What did we do? Scroll down to find out more!

On the sunny and warm Sunday morning after the wedding we decided to explore the downtown area and enjoy the Riverwalk along the Savannah River. We parked our car by an old railway station next to the Augusta Museum of History, packed some water in our backpack, and were off to enjoy the sunshine.

If it wasn’t for the Christmas decorations across the town it would’ve been hard to believe it’s December. The sun was shining brightly, the weather was close to 20 C and some of the trees still held on to green leaves. The Riverwalk was the perfect place to go for a stroll on such a day, and it was surprisingly empty. I’ve seen the pathways by the Elbe river in Hamburg more crowded in much less pleasant weather. 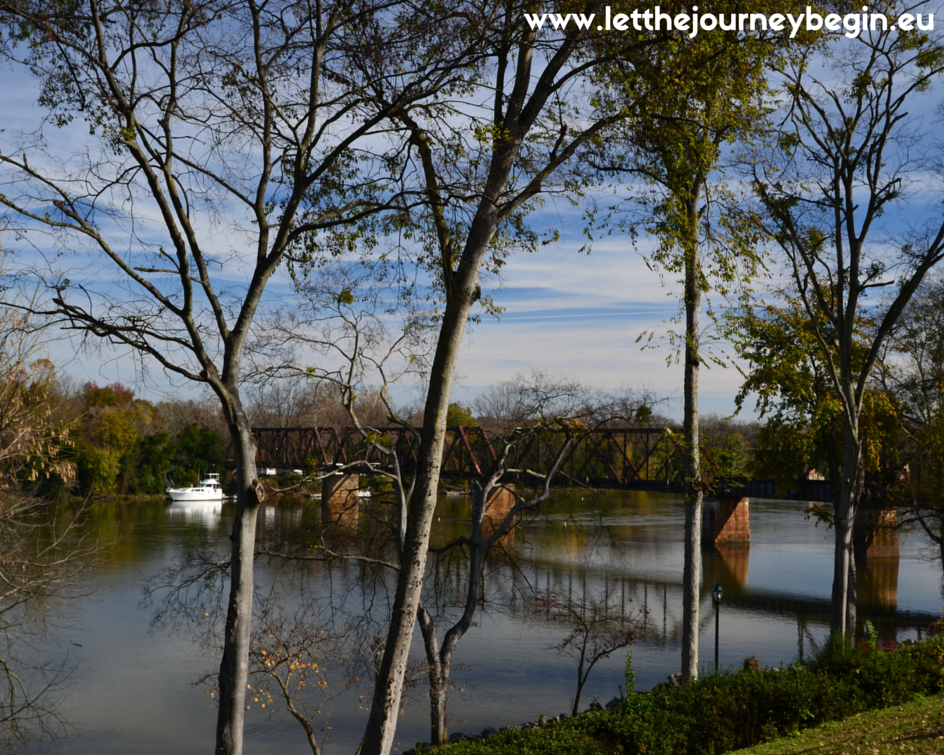 We enjoyed the views to the villas across the river, made a stop at the Jessye Norman Amphitheater on the riverside, and admired the small Japanese Garden. The Riverwalk also has a couple cool looking playgrounds but Birdy was too happy running along the red brick pavement and climbing the steps of the amphitheater to take notice. 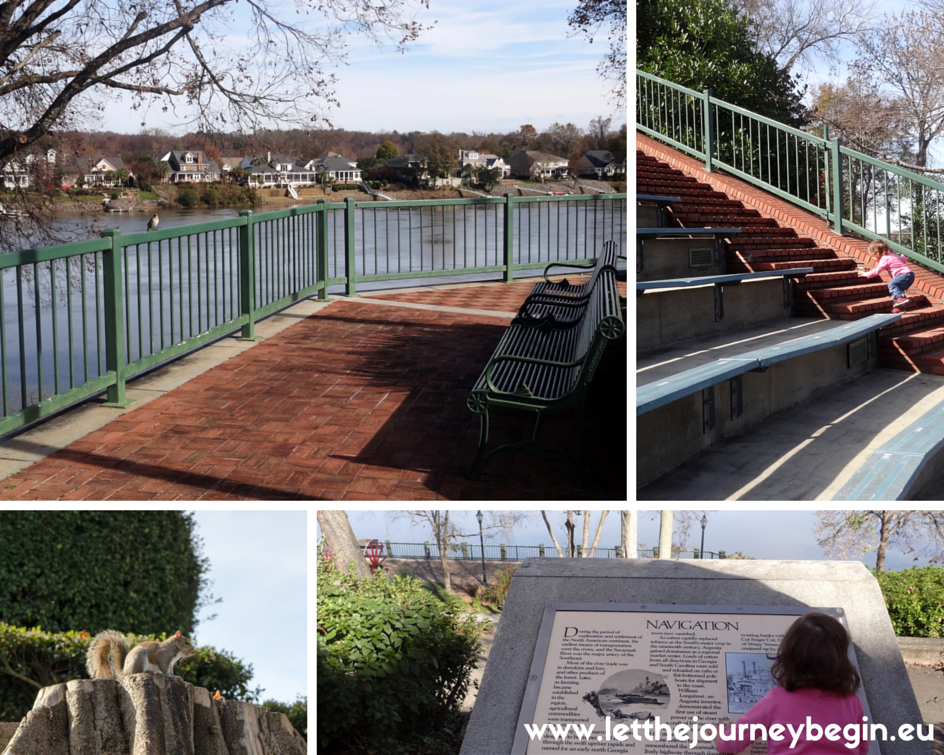 Once we had reached the end of the Riverwalk, we circled back to our car by Broad Street, the main street of the downtown area. Also here it was empty and quiet, most businesses seemed to be closed on Sunday. The downtown appeared to be a complete mix of architectural styles, old and new buildings; I particularly loved the old brick houses with their beautifully railed balconies and large shuttered windows. 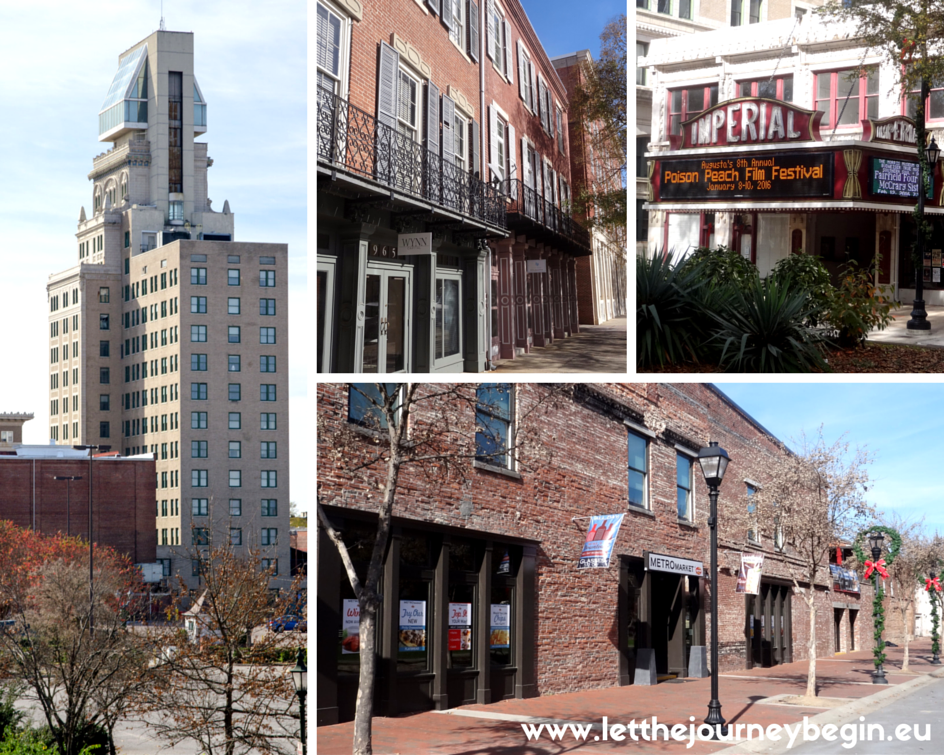 A few days later we visited another part of the Savannah River – the Augusta Canal Headgates and the surrounding walking trails – and enjoyed it just as much. The Canal, built in 1845, is a National Heritage Area and for a good reason: it’s the oldest continuously operating hydropower canal in the US. Historic significance aside, this is a perfect place to spend a sunny afternoon. 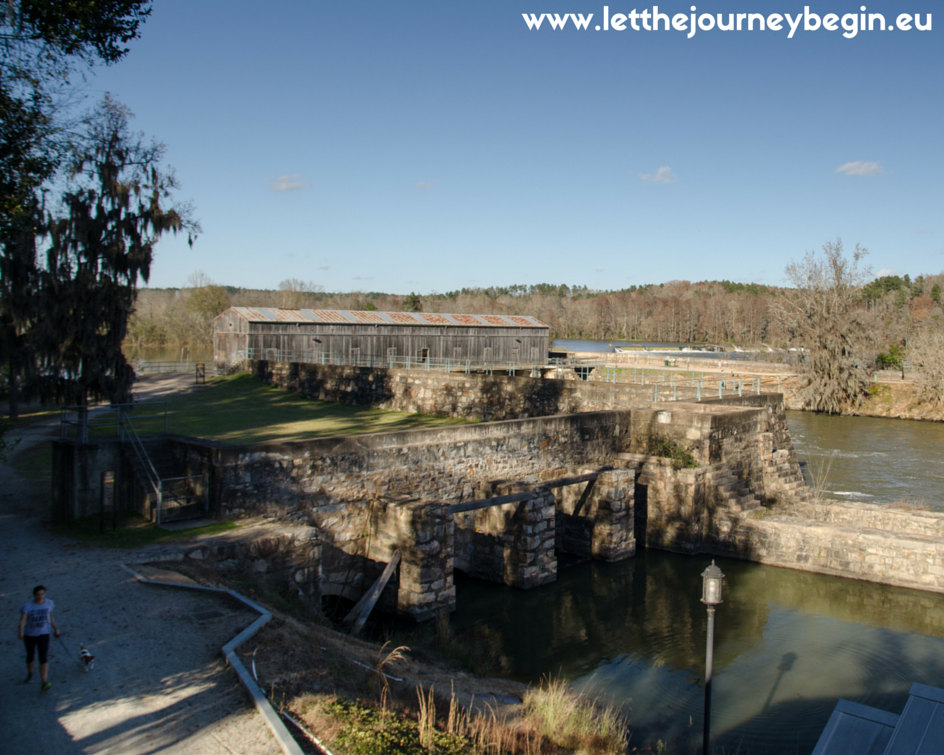 We crossed the Headgates and went for a walk along the pathway between the river and the canal. Birdy loved it here and she appeared to find pebbles and rocks at least just as fascinating as the canal, the river, and the waterfalls. 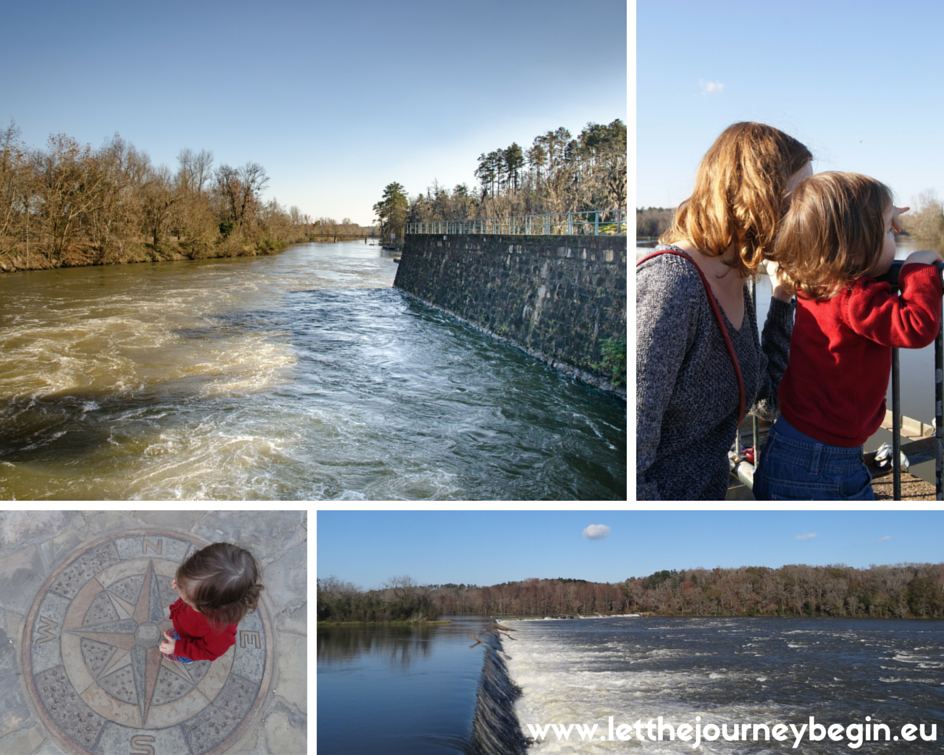 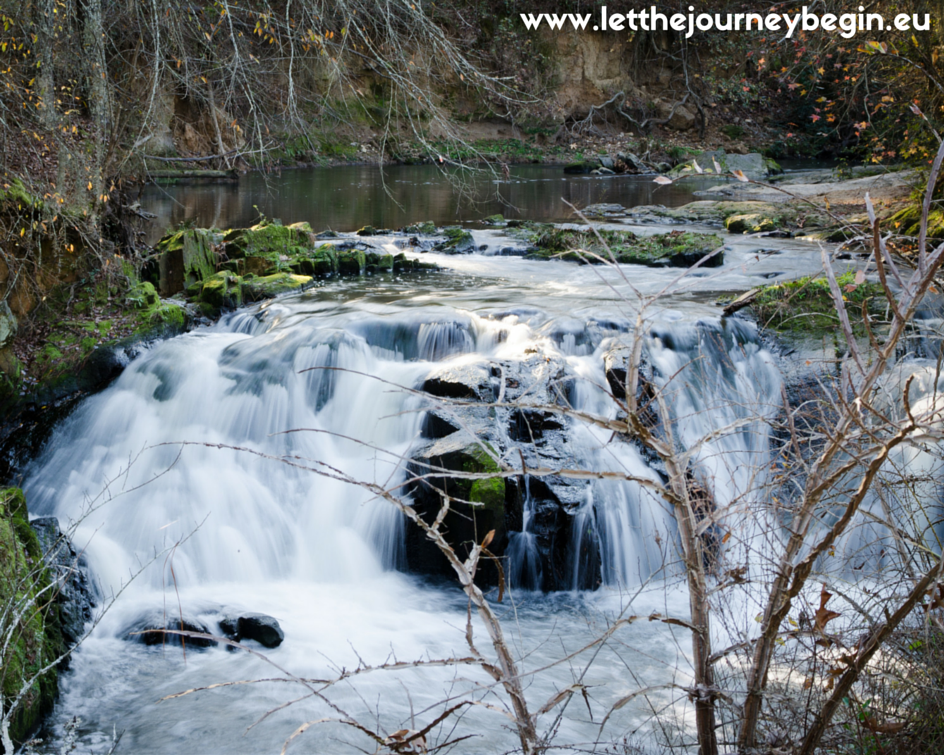 The town of Aiken, South Carolina is around a half hour drive from Augusta and well worth a visit if you’re ever in the area. We started our visit with a great lunch at a beer brewery restaurant and went on to explore the town and the quaint little specialty shops. My favorite was definitely the candy shop with all the free samples. Yum! 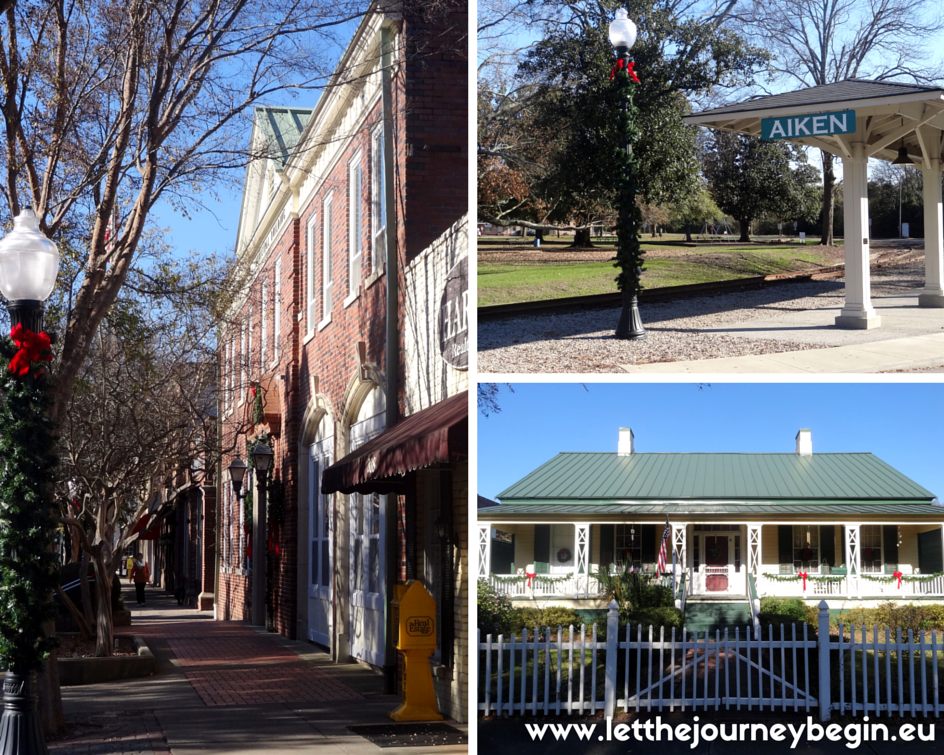 We also made a stop at the Aiken Visitors Center and Train Museum that is entirely run by volunteers. As it turns out, this cute little town is located on the first steam powered commercial railroad in the US and used to be a popular winter destination for the Northeast rich and famous. Do names like Astor or Vanderbilt ring familiar to you?

Birdy, of course, had no interest in all the information materials provided in the museum. She was so captivated by the model train that was running along the exhibit that it was quite difficult to convince her to leave! 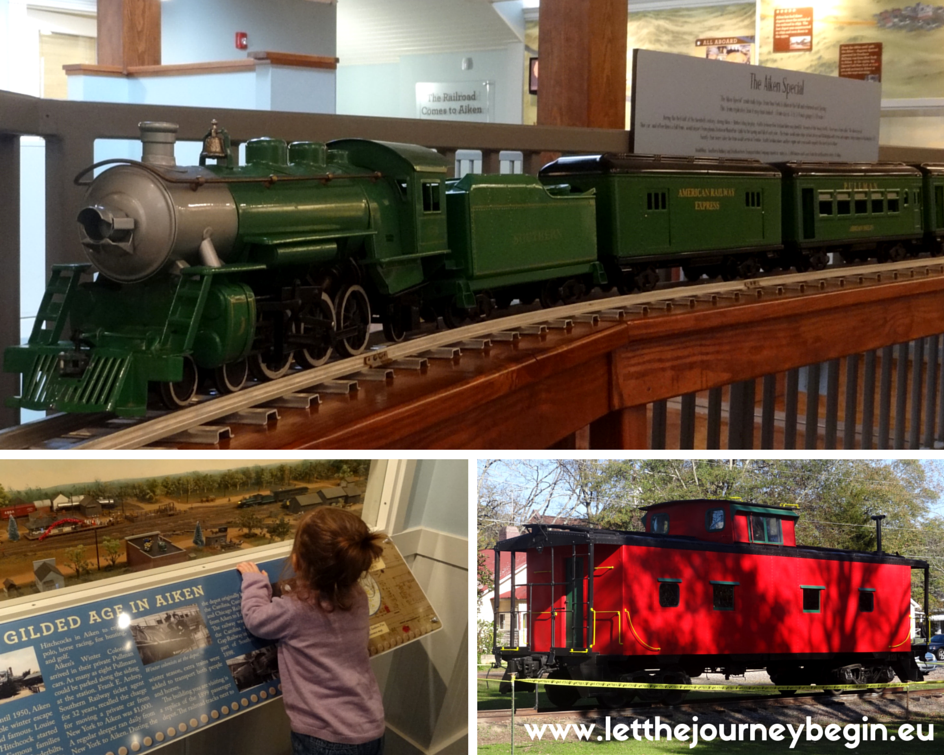 Lights of the South

From what I understand, once the Holiday season rolls around, various Christmas light shows are popular all across the US. I had heard about them and was curious to see one in real life. We visited Lights of the South near Augusta one evening and were not disappointed. Quite the opposite – I don’t think I’ve ever seen my daughter so wide-eyed, impressed, and excited all at once.

We went on a hayride (i.e. sat on haystacks at the back of a tractor) to see the over 5 million Christmas lights throughout the dark forest. Sadly it was difficult to make good photos in the dark on a bumpy road. So let me just say that the decorations were a fantastically eclectic mix that began with biblical themes and various animals, culminated with a myriad of Disney characters, and were topped off with patriotic elements such as the Statue of Liberty and a gigantic US flag. 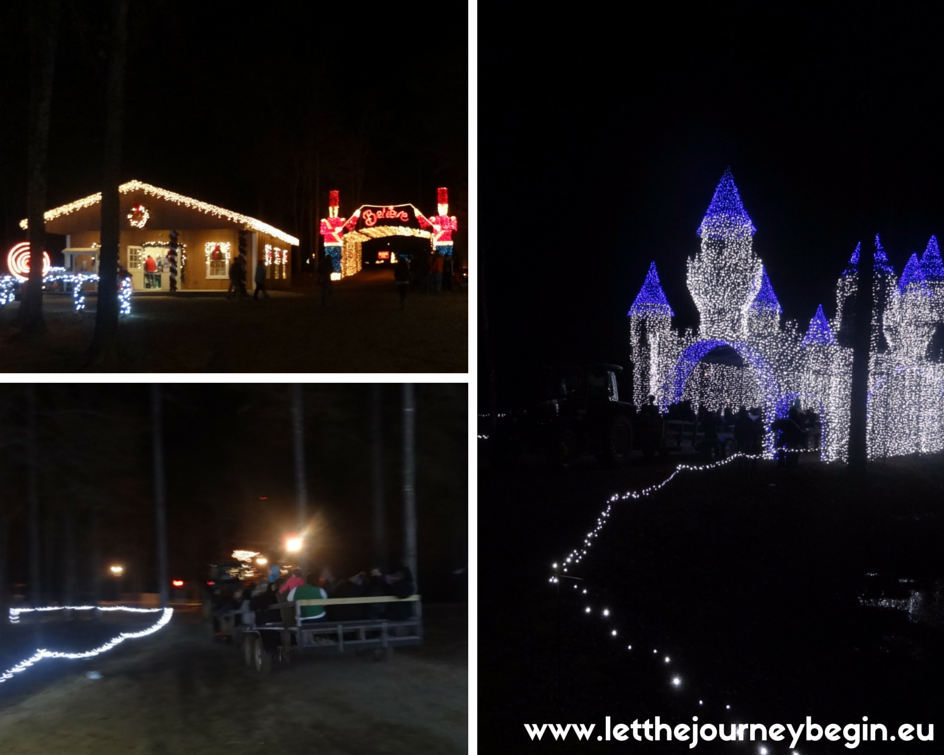 That’s all for now. Next up: our visit to Atlanta!