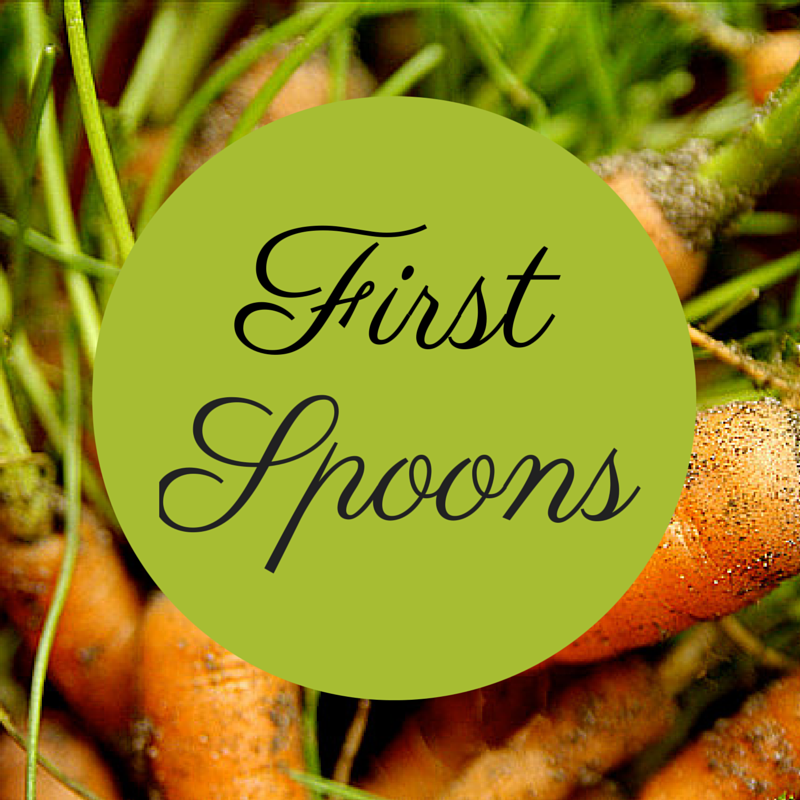 Already two months have passed since I did my little inquiry into first baby foods around the world. At the time I was a little confused by the different recommendations on when to start introducing solids and what the very first food should be.

As I shared with you my search for answers, the story would be incomplete without also telling what we ended up deciding. This is the story of our journey into the unknown waters of solid foods. Birdy has gotten quite far in this short time!

The first question was: when should we start? Between Birdy’s pediatrician recommending to begin at 4 months and other sources like the WHO recommending 6 months, we were a little unsure what is best. In the end we decided to let Birdy decide for herself. As she became increasingly fascinated by watching us eat (have you ever tried eating a meal with someone gaping at every morsel you chew?),  and was soon making it clear with her whole body that she would like to participate as well, it was time to start with solids. At that point Birdy was around 20 weeks old.

The next question was: what should we feed her? If I had learned one thing from reading about first foods in so many different cultures, it was that there is no one correct first solid food. That said, I did have my criteria: in my book, an ideal first food should be something that is not only baby-suitable but also regional and seasonal. Thus, as exciting beginning with bananas or avocados – the two foods mentioned often by the parents in my little inquiry – would have been, these fruit are definitely not native to Germany. Not to mention the fact that I do not have the slightest idea when either of them is in season.

As it happens, that what was seasonal and regional in the late summer when we prepared Birdy’s first meal, was exactly that what is most often recommended in Germany: carrots! We bought a nice bunch of carrots from the organic salesman at our local farmers’ market, steamed and pureed them, and prepared a brand new bib and a camera for capturing that very first spoon. We were happy and excited to see that, indeed, we had not begun too early – despite making hilarious facial expressions, Birdy ate her first few spoons pretty well!

We fed her pureed carrots for a week and, as all went well, gradually started to introduce also other veggies: potatoes, pumpkin, parsnips, cauliflower, broccoli, turnips, and sweet potatoes are all already on her lunch menu. I usually pick and choose from the weekly offers at the farmers’ market; it being harvest time, we are spoiled for choice. The vegetables then get steamed, pureed, portioned, and stored in the freezer. With the small amounts Birdy eats it would simply be too much work to cook fresh every single day.

At the age of six months we started adding meat to her meals twice a week and introduced the second solid meal: full-grain cereal with full fat cow’s milk for dinner. I must admit that I was a little cautious with this particular recommendation: cow’s milk for someone so little? Apparently the currently favored approach to potential allergens over here is early exposure. On the bright side, by now we already know that Birdy is OK with both lactose and gluten.

This week we are introducing porridge number three, it is a morning meal of cereal and fruit. In addition to these, we sometimes give the little one some finger food for playing around with and feeding herself, for example, pieces of cucumber, apple or banana. When eating out she often gets a bit of fresh restaurant-baked bread.

In Birdy’s six month checkup our pediatrician gave us the green light to give her pretty much anything (within reason, of course) except three things:

I must admit that the journey of solids is not always smooth sailing. For each day when Birdy eagerly awaits each spoon there is a day when half of the meal remains uneaten. Some days she does not leave a single stain on her bib while others are a constant practice of the ‘push food out – put hand in mouth – rub hand in eyes’ routine. But that is all OK. The way I see it, this age is all about getting to know different tastes and textures. As I continue to breastfeed, she will not go hungry and receive enough nutrients independent of how much solids she consumes any given day.

That is our story so far and now the ball is in your court, my dear reader! If you have suggestions and recommendations for nice baby foods, experiences that you would like to share, or any comments about what you have read, please comment below!