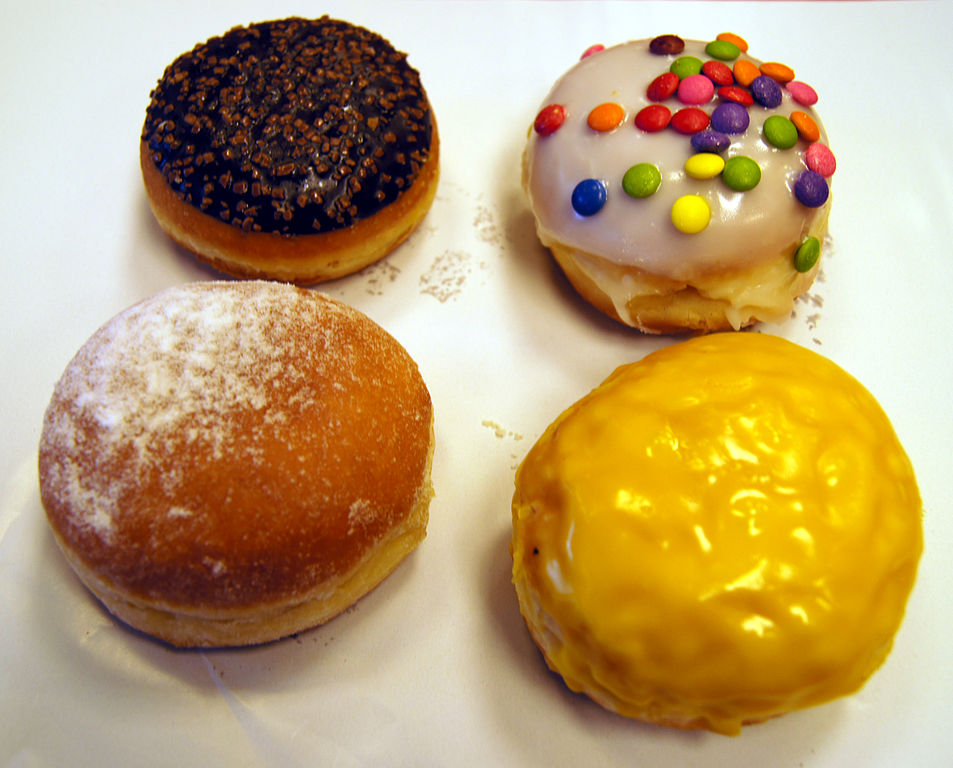 Since moving to Germany I’ve had to learn a few things about the New Year’s. First, it’s not called New Year’s Eve over here, it’s Silvester. Second, you don’t wish people happy New Year, instead you wish a guten rutsch, literally, a “good slide” (presumably, into the upcoming year). Third, for some unfathomable reason most Germans will watch a 1960s British comedy sketch called Dinner for One at least once.

Last but not least, at least in North Germany the first food most people consume right after the clock strikes twelve is a Berliner, i.e. a yeast dough pastry fried in fat, filled with jam, and covered with powdered sugar or icing. On the 31st December you have to make sure to get to your favorite bakery before noon if you want to score fresh Berliner for your Silvester celebration. Some even pre-order them weeks in advance to make sure that they get exactly the flavors that they prefer. Trust me, it’s not an easy choice – there’s everything from classic fillings of red berries, apples, or plums, to more exotic combinations of vanilla cream or egg liquor.

Eating a giant fatty pastry right after toasting a glass of bubbly at midnight is definitely one of the more curious German traditions but why not begin a fresh year with a yummy dose of sugar?

Happy 2016! The Germans begin the New Year with a berliner. Because the last time you had sugar was already last year #2016 #newyear #happynewyear #Germany #berliner #lecker

What’s the origin of the tradition? Well apparently nobody really knows.

The most likely explanation is that a Berliner is the ideal combination of all the good things (think: fat, eggs, milk) that are forbidden during the upcoming fasting period. Or perhaps it’s just a little guilty pleasure before we have to behave and keep up with all the well-intentioned New Year’s resolutions?

Be that as it may, we had not one but two Berliner this year. Because why not?