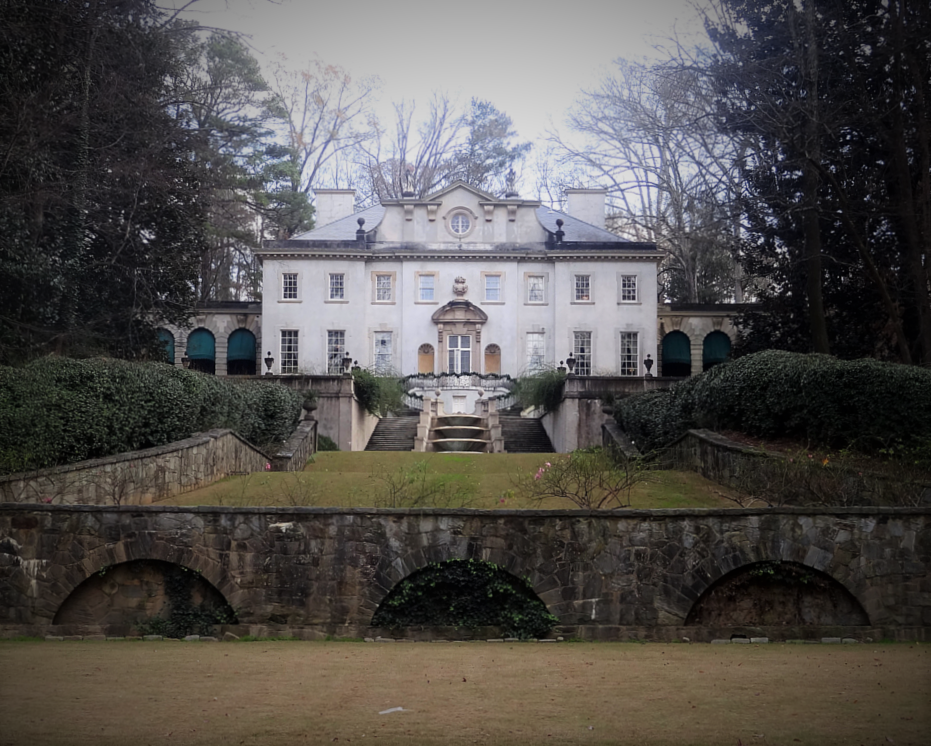 We spent most of our trip to the US in and around the city of Augusta where our friends live. But, as we were flying in and out Atlanta we wanted to use the chance to see a little of the city that’s the capital of Georgia. Our flight back to Germany was on Wednesday evening and the plan was to spend the whole day in Atlanta. The only question was: what should we do? In Europe the answer would’ve been pretty simple: head to the (historic) city center, park the car, and explore the main sights on foot. However, we were in the US where you can never know if such a plan is likely to work.

That said, Atlanta seemed to have quite a long list of various attractions: the Georgia Aquarium is the second largest in the world, the city is the birthplace of Coke so there’s the World of Coca-Cola Museum, it’s possible to visit the home of Martin Luther King Jr., there are numerous other great-sounding museums, and plenty of green spaces.

Weighing the options we decided that we want to spend the day largely outdoors. After all, we were about to spend the best part of the next 24 hours in airplanes and airports. The weather was great so we wished to get as much fresh air as we could and let Birdy run around to her heart’s content. Fortunately we stumbled upon a place that would allow us to do exactly that AND learn a little about the region and its history: the Atlanta History Center.

The center is located in a picturesque part of the city and offers a great combination of exhibitions and outdoor spaces: the main building hosts several exhibitions, there are three historic houses on the property, as well as six different gardens. Unfortunately we didn’t have enough time to also with the Margaret Mitchell House as it is located in the Midtown campus of the museum, closer to the downtown of Atlanta.

We started our visit with the Centennial Olympic Games and American Civil War exhibitions but soon realized that a freshly napped toddler does not mix well with grown-up attempts to read about important past events. So we decided to head outdoors for the part of the museum that interested us the most: the historic houses.

Our first stop was the historic family plantation. Originally built in the 1840s somewhere on the outskirts of Atlanta, the main house was moved to the museum in the 1970s. It is surrounded by several other buildings that house an open-hearth kitchen, a dairy, a blacksmith shop, a smokehouse, a slave cabin, as well as a barn. While we explored the buildings and the traditional gardens, Birdy was happiest playing with the sand in the farm yard and looking at the sheep and chickens.

While this part of the Atlanta History Center reminded me of some other open air museums that I’ve visited in Latvia and Germany, this one had a pretty cool addition: interpreters dressed as farm inhabitants. They could provide us with more information about the way life used to be in the American South back in mid-19th century while staying in character the whole time. They even took care of the animals and cooked their food in the old kitchen. 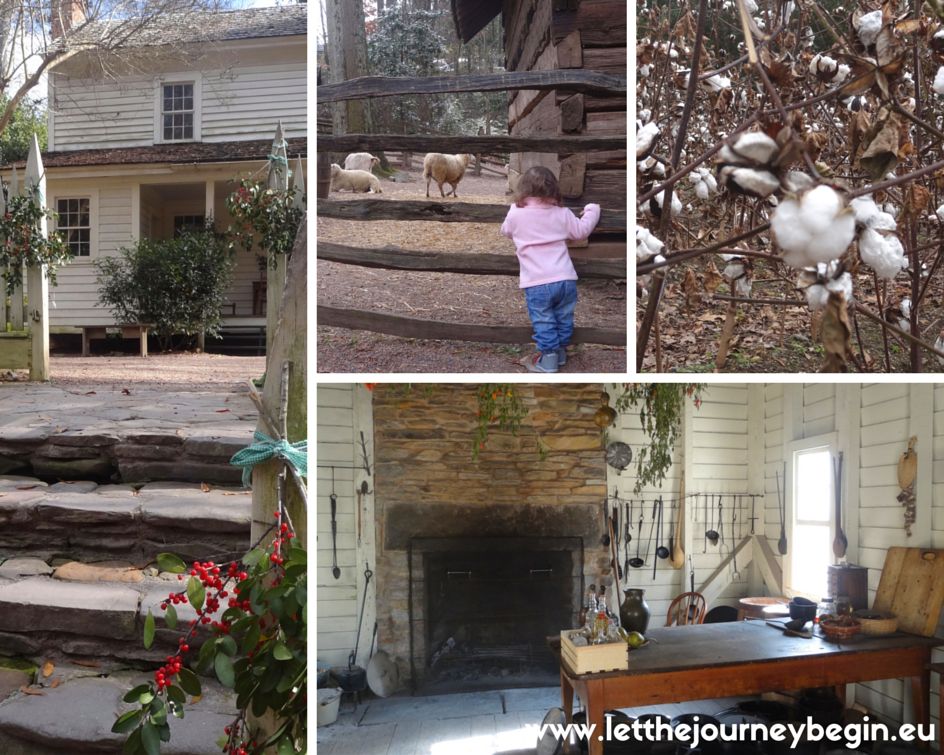 Once we succeeded in convincing Birdy that she should say bye-bye to the sheep, we continued to the museum’s most impressive building: the 1920s mansion known as the Swan House. The house and the surrounding properties were owned by a family who earned their fortune doing cotton brokerage, and later donated it to the city of Atlanta. The building is gorgeously restored and makes you feel like you have stepped into the mid-war period. The beautiful surroundings and the smartly dressed costumed interpreters even make you feel a little like an intruder from a different century. 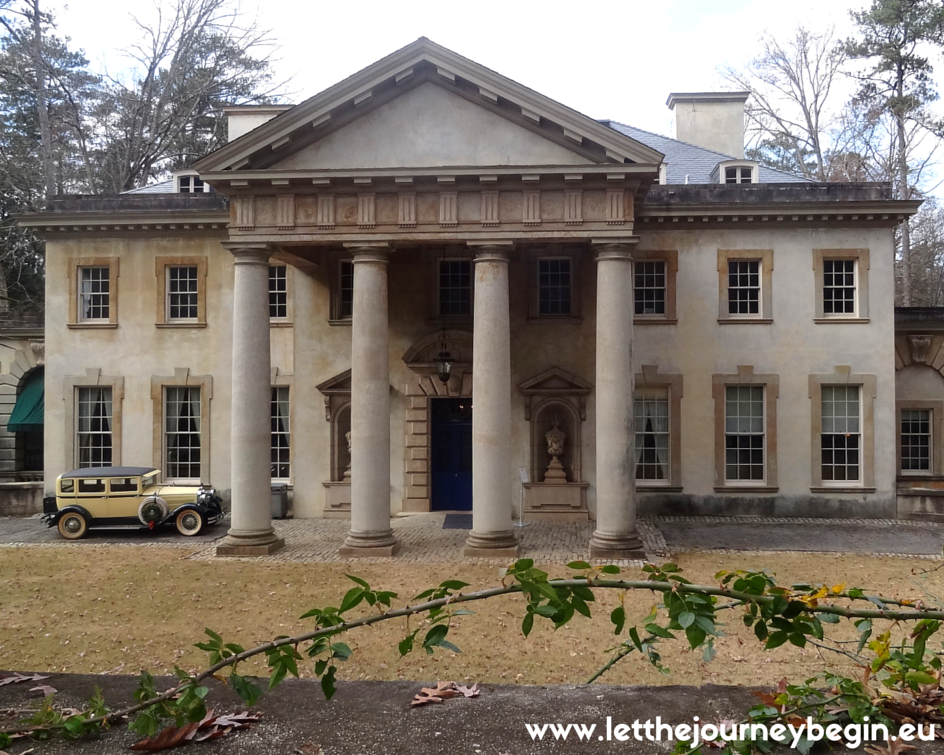 It being December, the mansion was already decorated for Christmas. We explored it from top to bottom, getting an idea about everything from fancy 1930s kitchen equipment, luxurious master bathrooms, and servants’ sleeping arrangements in the attic. Our little one was happiest in the children’s room where she could play with some of the toys and draw at the small table. 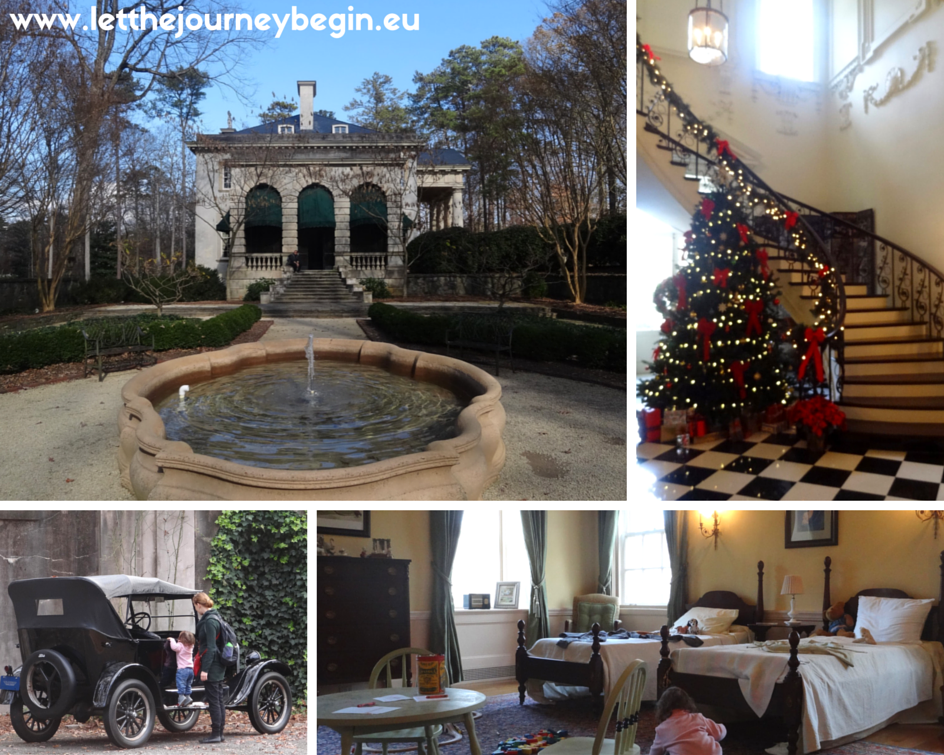 After visiting the gorgeous Swan House the third historic house – the log Wood Family Cabin – felt a little boring. We didn’t linger there long and instead made a lovely walk through the small woods. I could imagine how beautiful this place is in the other seasons when the trees are covered with leaves and the numerous gardens are in full bloom.

All in all, we had a wonderful day at the Atlanta History Center and it is a great place for kids of all ages. There are even two traditional Victorian Playhouses on the property – I would have loved to have such a mini house to play in as a child! 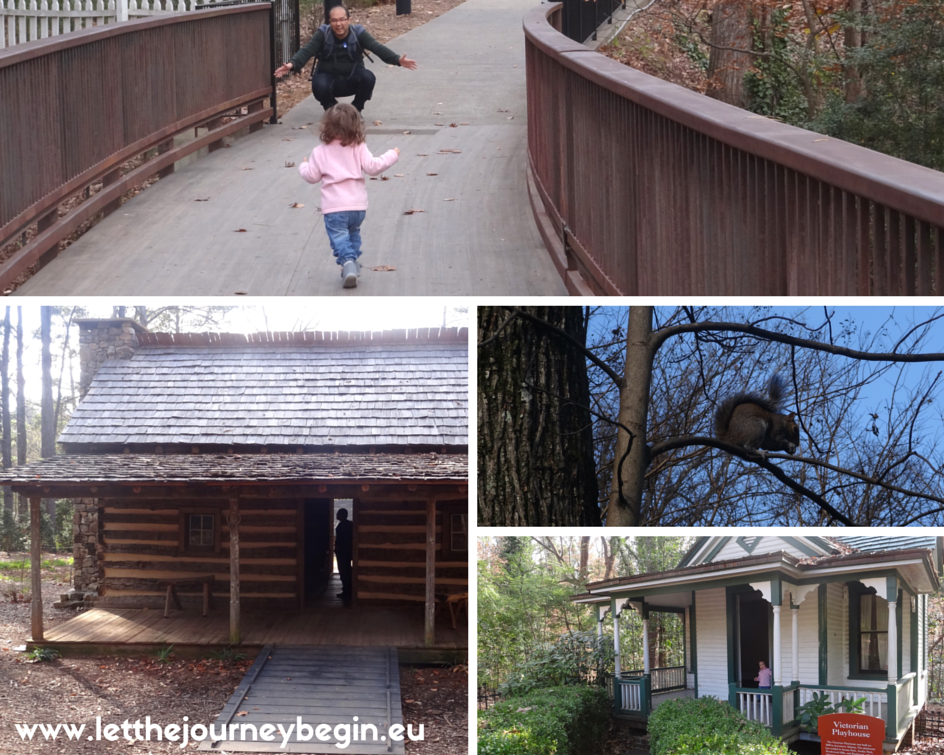