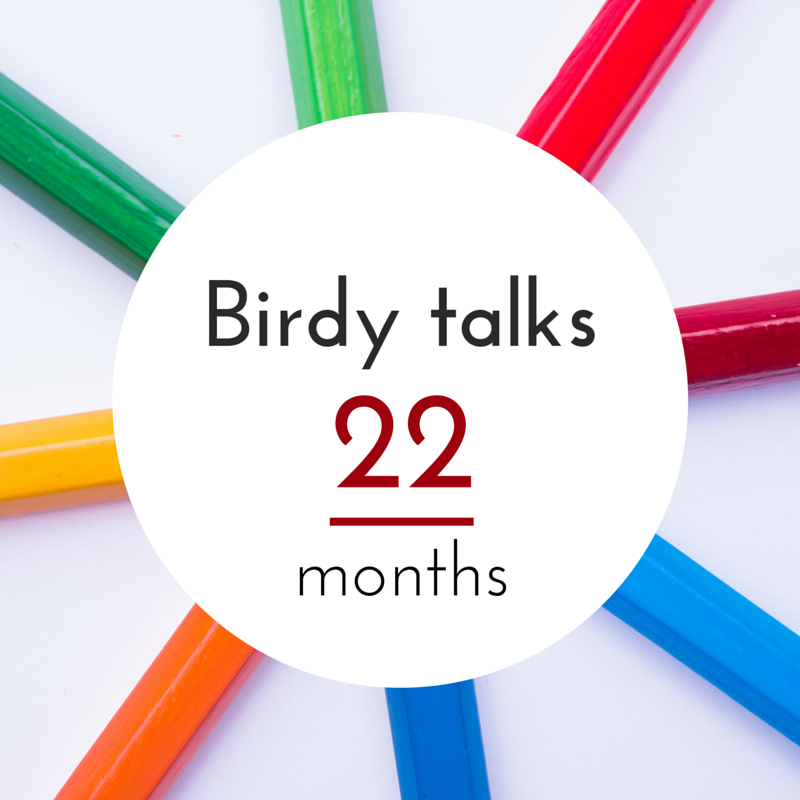 It’s been a while since I last wrote about our little one’s language progress and so much has happened in just a few short months. Birdy has experienced a true language explosion and I can no longer keep up with all the words that she knows.

She’s also getting pretty good at repeating words and sounds. In fact, even her babbling sounds so much like a true language these days that people sometimes assume that she’s speaking properly but in a language that they don’t know. My mother-in-law was convinced that the little one speaks Latvian, whereas during our US trip people assumed that she’s talking in German.

These days Birdy is experimenting with two and three word sentences. Most of the constructions are either two nouns, e.g. what belongs to whom, or a noun and a verb, e.g. who is doing what. Her first two word combination was “ejam mājās” (let’s go home in Latvian), followed by “tētis majās” (Latvian for daddy’s home). Her first three word sentence? “Birdy no coin” also in Latvian. Before you conclude that we have a very materialistic child, I should probably clarify that she was trying to explain that she’s lost all the coins from her play wallet.

As you can see from these examples, Birdy’s language progress continues to be skewed towards Latvian. It would be easy to conclude that it’s because I’m spending more time talking with her or that I am better at modelling sentences but, to be completely fair, this outcome is not only my accomplishment. A lot of credit goes to hubby who uses Latvian words and phrases when talking with as well. He’s learning the language alongside Birdy and is getting better and better at it. And no, I’m not worried that this mixing of languages might confuse her, the little one has plenty of other German-only speakers around her (here’s the research on it).

Since our trip to the US back in December Birdy seems to understand more English and likes to repeat words and phrases that she finds funny. Her favorite is “I know!” (I’m not entirely sure that she understands what it means though).

In general, the little one understands that the same object or action is called differently by different people and she’s slowly starting to figure out that she should use different words when playing with different friends or family members. However, at the moment she doesn’t need to do it too often as at home she can use whichever word she prefers and know that both parents will understand perfectly well.

These days Birdy is picking up a lot of vocabulary from picture books and cartoons. She absolutely loves songs and finger games and is very fast at picking up melodies. The lyrics, of course, are very approximate at this point, and she sometimes likes to mix it up a little and add her own lyrics to various melodies or combine several songs into one. Her love for all things music if probably best demonstrated by the fact that words for dancing, singing, and music can be counted among the first 100 words in her active vocabulary.

Birdy’s newest interests are counting and colors. That said, both of these will take some time: she currently counts from three to ten, leaving out seven, and the only color that she can reliably identify every time is blue. We’re excited to see how it develops!

Check out also these posts about Birdy’s language development and the challenges along the way: