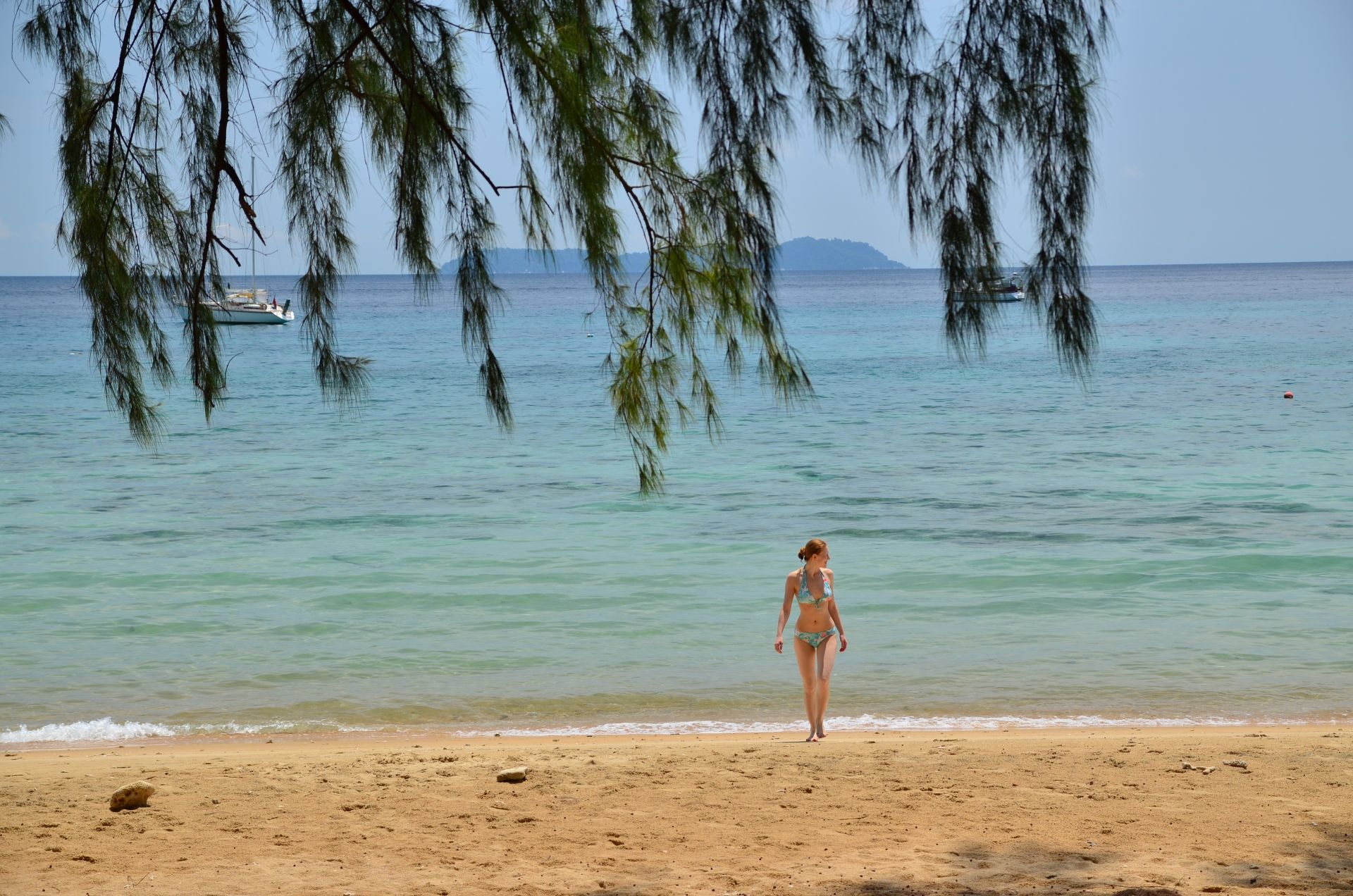 Let me tell you a little about Tioman. It is a small island (about 39 km long and 12 km wide) in the South China Sea, near the East coast of Peninsular Malaysia. Tioman is sparsely populated – there are only eight villages scattered around the island, occupying thin strips of land on the waterside. The middle of the island is hilly and covered in thick rainforest that often stretches all the way to the waterside, leaving just a little stretch of sand or piles of large rocks by the water. The waters around Tioman hide numerous coral reefs – swim just a little away from the coast and beneath you will be a whole world of corals, tropical fishes, mean looking sea urchins and (if you’re lucky… or unlucky) you might even meet a shark.

We stayed in the biggest village of the island – Tekek. It is the first destination to most visitors of Tioman as it is here where the little airport and the jetty for mainland ferries are located. The size of the planes fit the size of the airport… 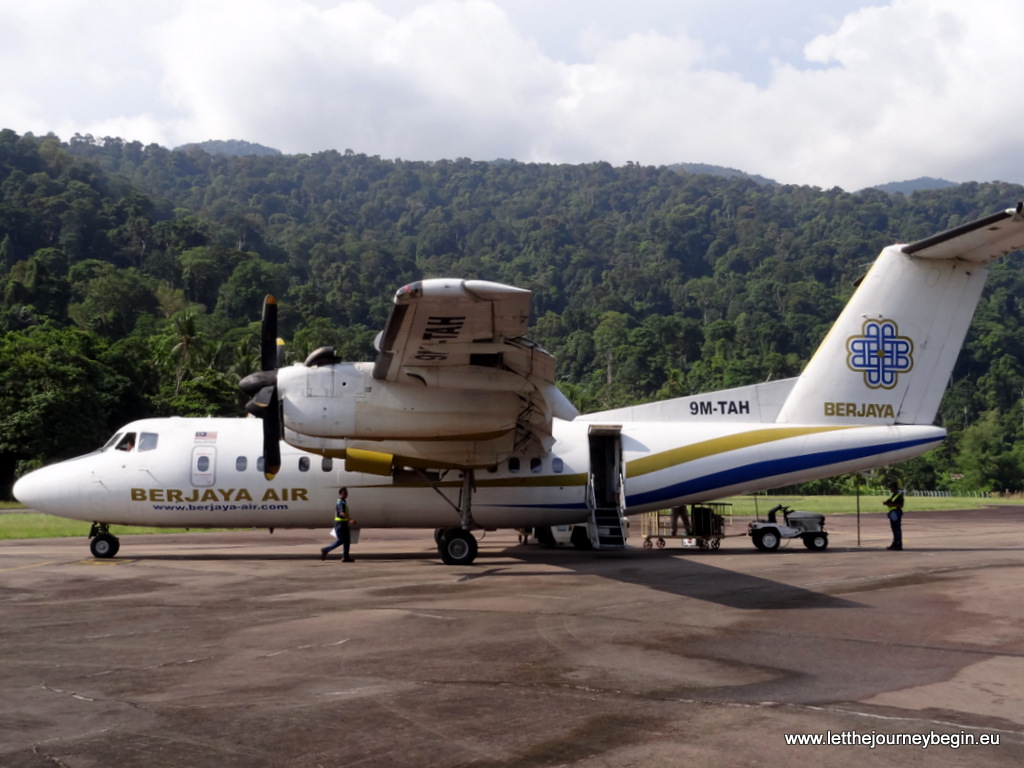 There are only two roads (to be precise, connected concrete blocks) on the island – one connects Tekek with the village just north from it, another stretches to Juara – a village on the other side of the island. The road is parallel to the sea and not reached by the refreshing breeze, making it a hot and unpleasant walk when the sun is up. 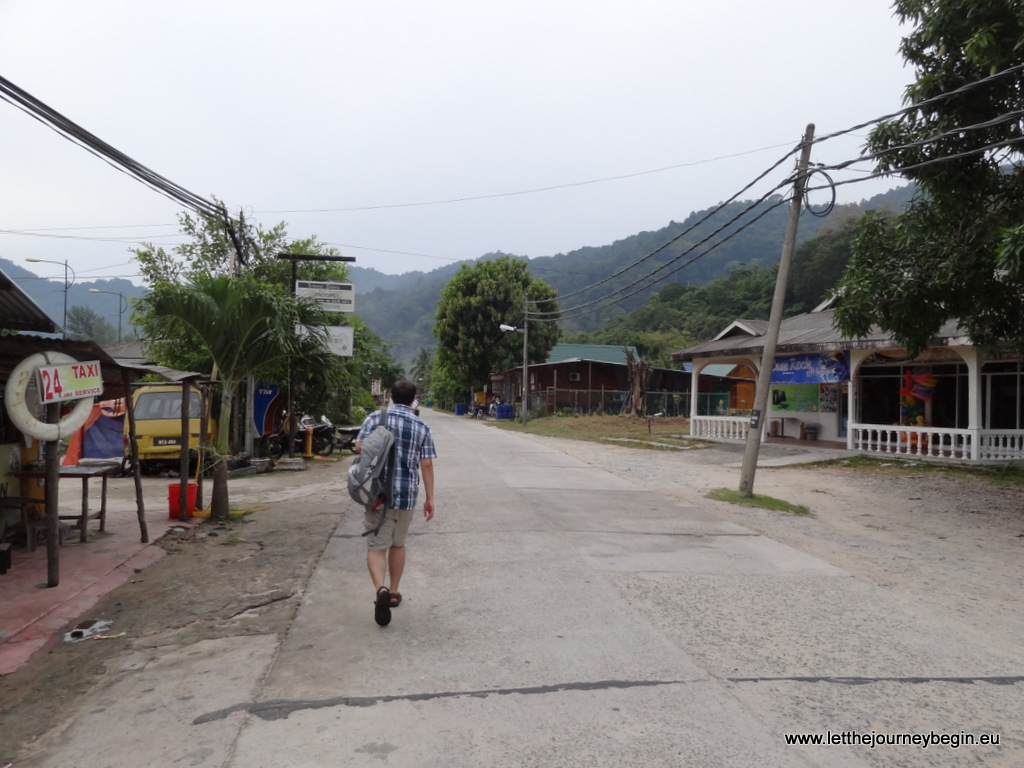 There are three means of transport on the island: (1) scooters – perfect for quickly getting around instead of having to walk in the heat, (2) four wheel jeeps – best for driving across the jungle serpentine roads from Tekek to Juara, and (3) boats – from little fisher vessels to water taxis. As getting around the island is not easy and the options are limited, transport is the most expensive of the services on Tioman. The water taxis to the south of the island ask around 25 EUR for taking one person one way. We found cheaper ways for moving around though, more on that in the next posts.

We were staying in a little place on the outskirts of Tekek called the Swiss Cottage. As we arrived there we were greeted not only by the lovely staff but also by quite a few cats that were lazing around in the shade. 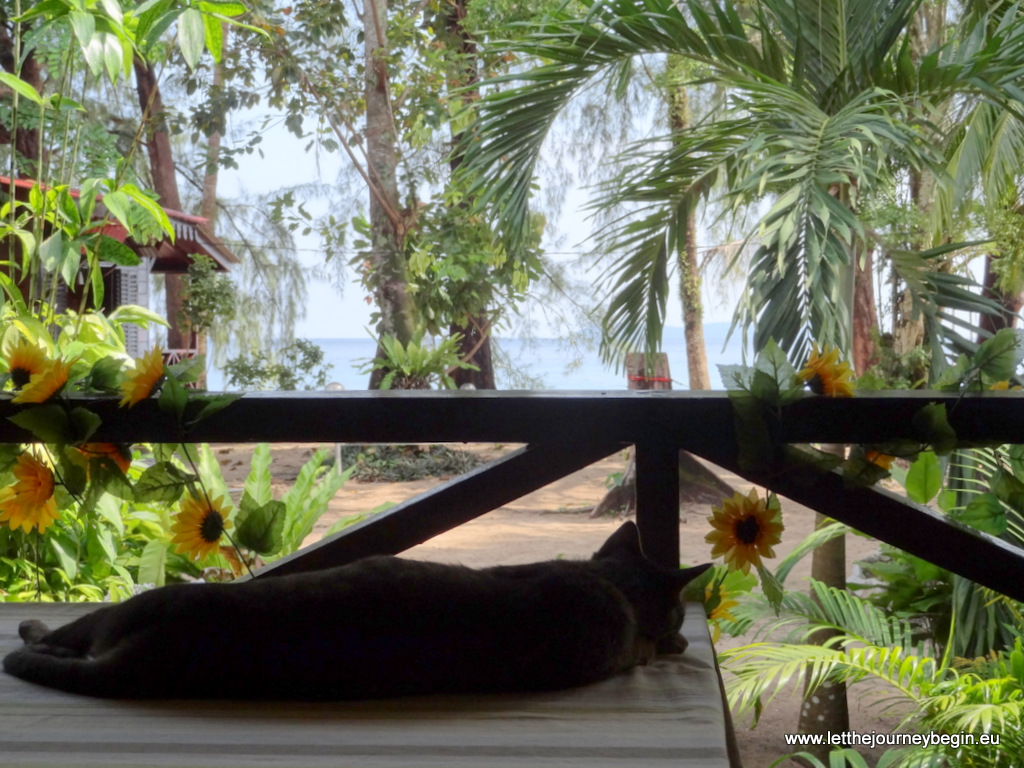 Our bungalow was nice, spacious and right on the beach. Our favorite place was the terrace – looking out to the water, shaded by the trees growing next to the bungalow. 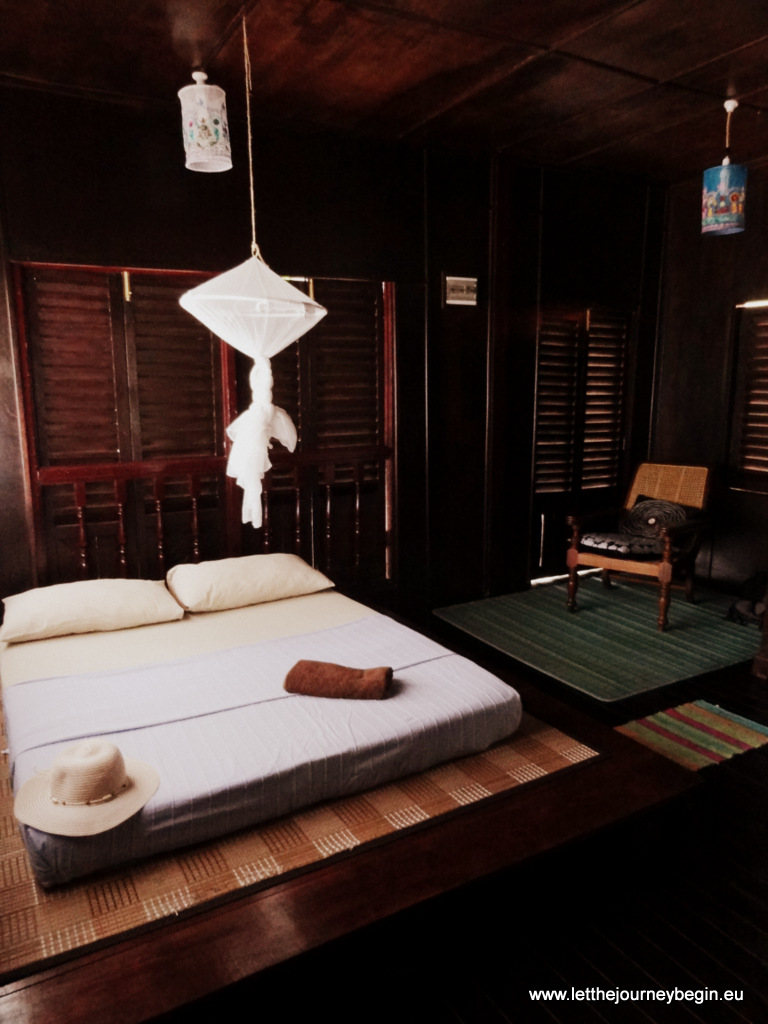 Working on the blog… 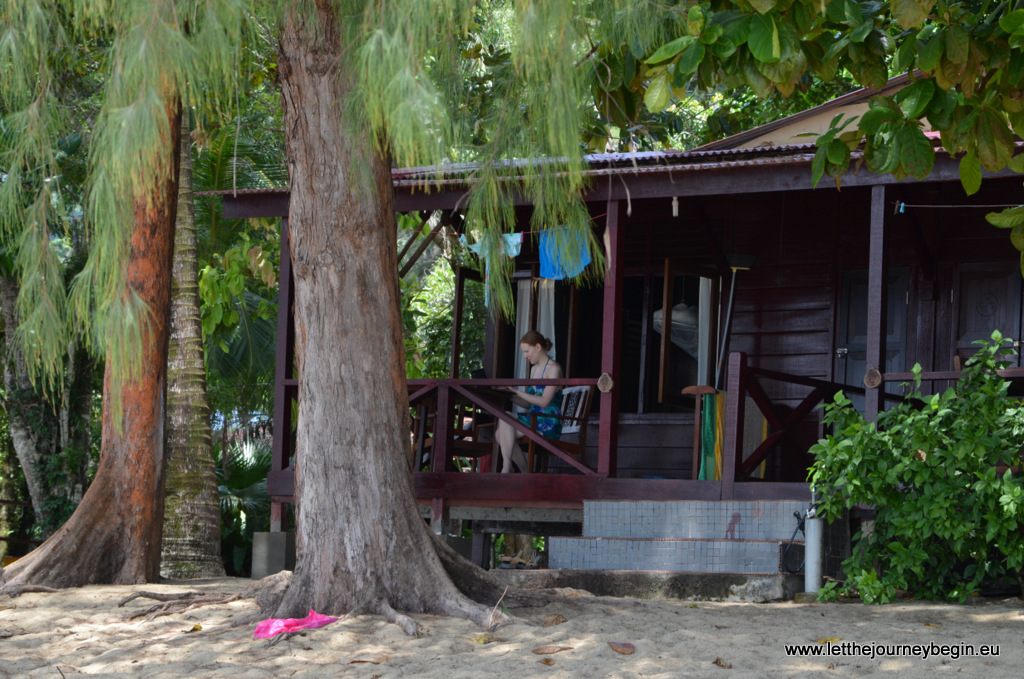 We also had a special cat friend of our own – she was hanging around our bungalow in hopes of getting some food. In the first night, when we had opened our window to let in some fresh breeze from the storm that was raging across the water, the cat had jumped into our room and made herself comfortable on the chair. Imagine Daniel’s surprise in the morning when he went to take his clothes and found a cat lying on them! 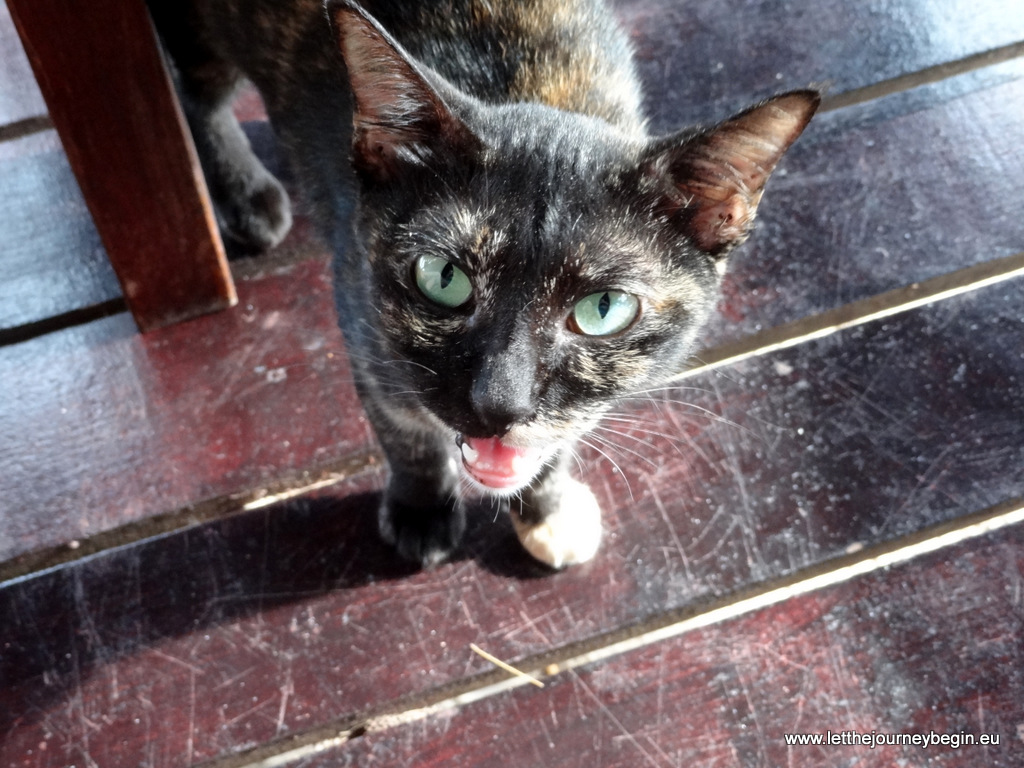 We spent a few blissful days here having a lot of sleep, lazing on our terrace, swimming whenever we felt like, and finding nice places for dinner. What else can one wish for? 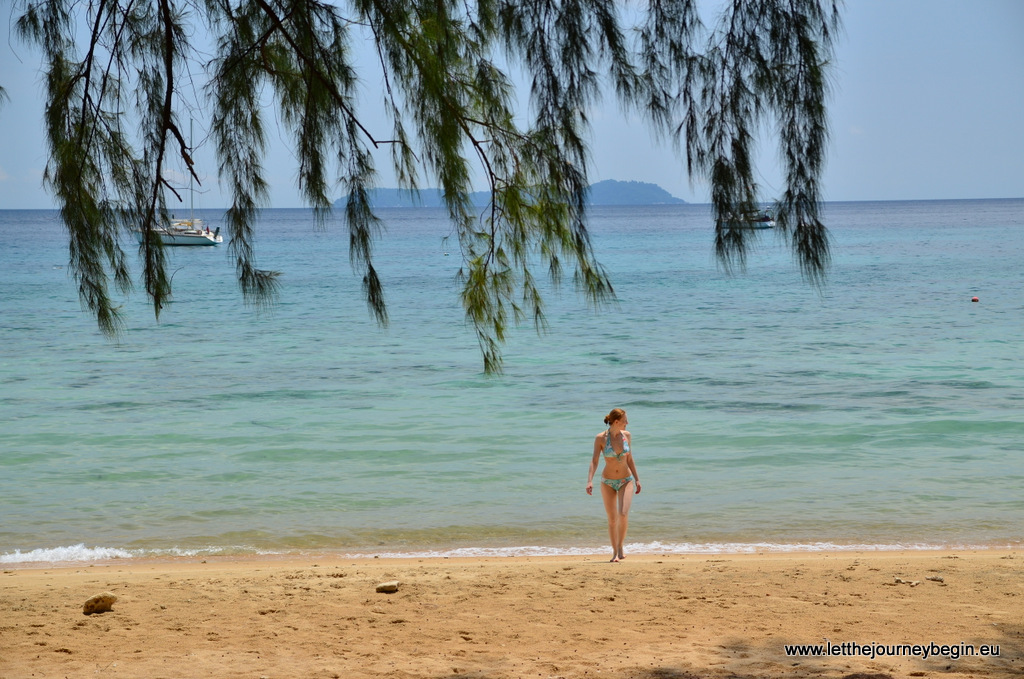 Well, the only thing we didn’t get was the perfect sunset – every evening we were hoping for it but the sun always hid behind the clouds at the horizon. 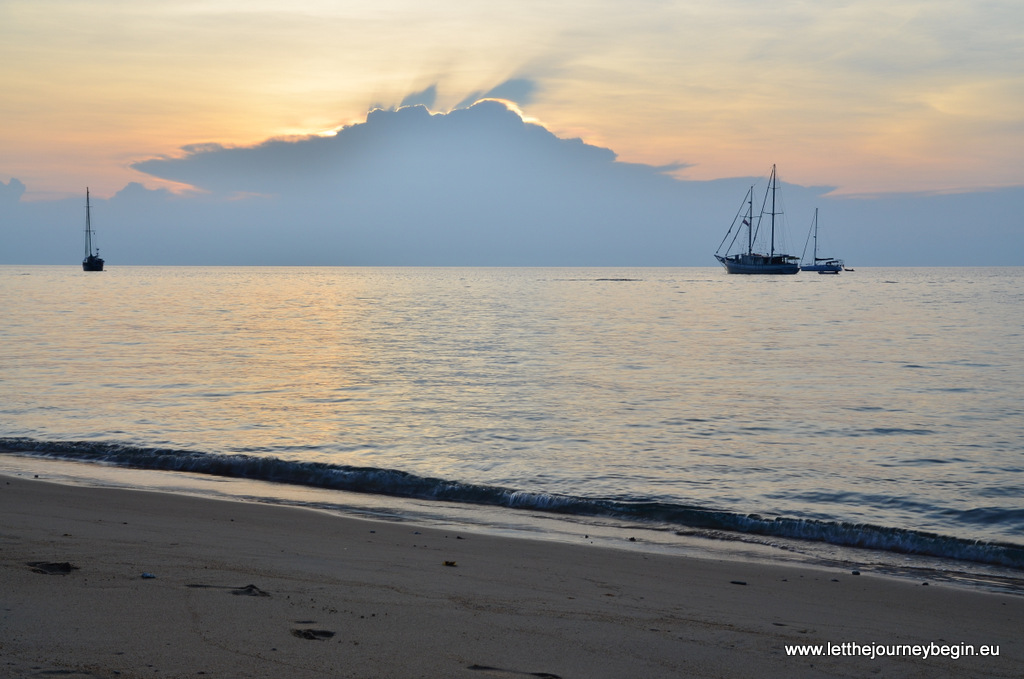 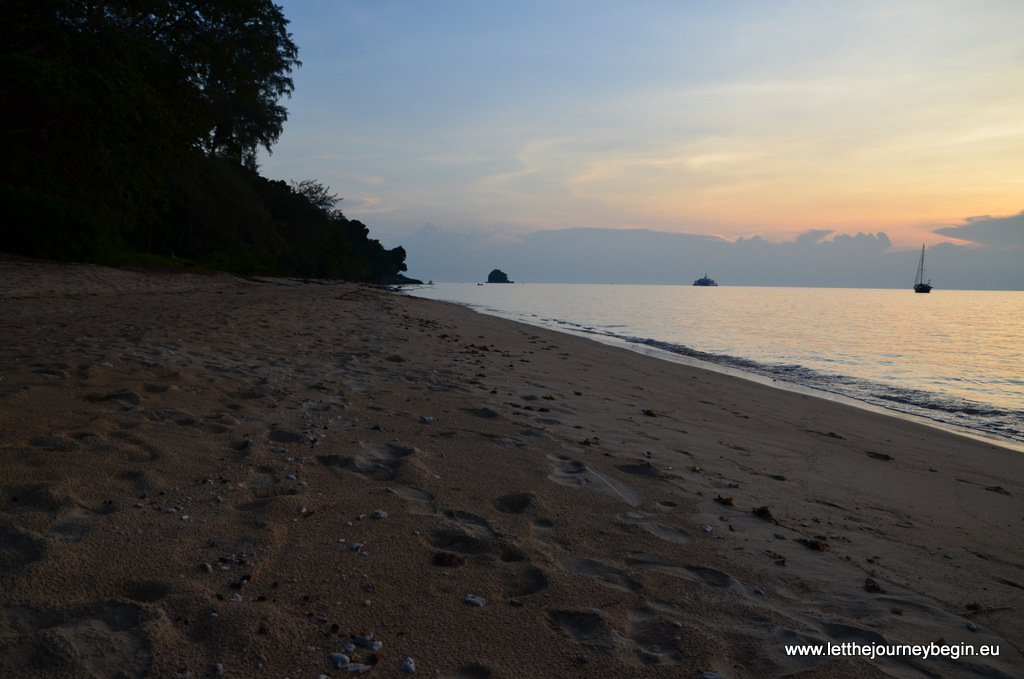 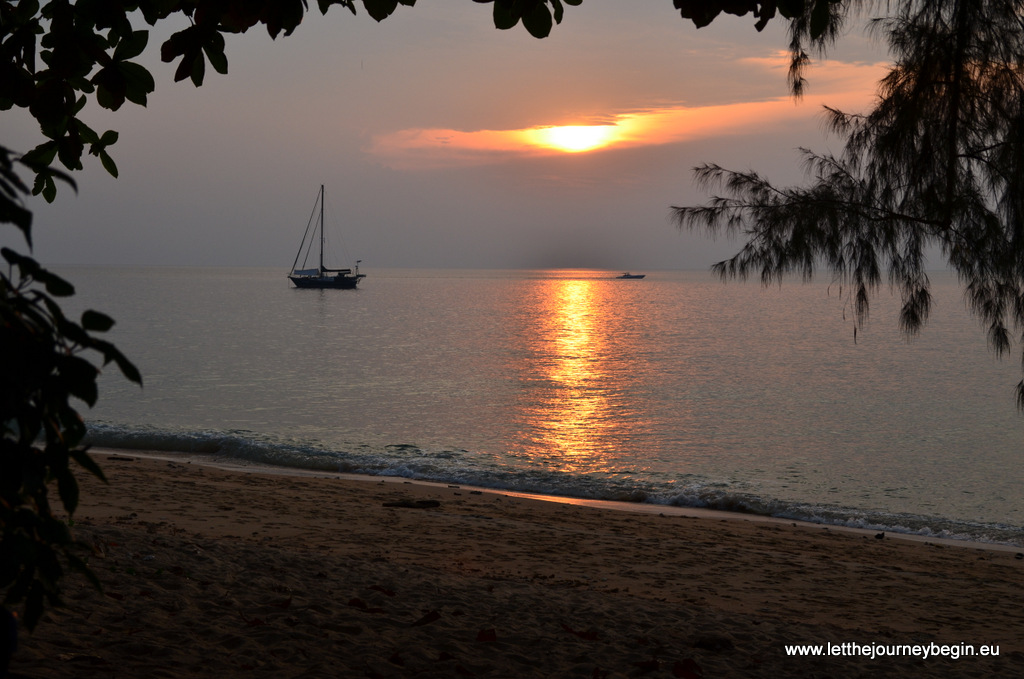 When the sun had set, it was time to make the bed. 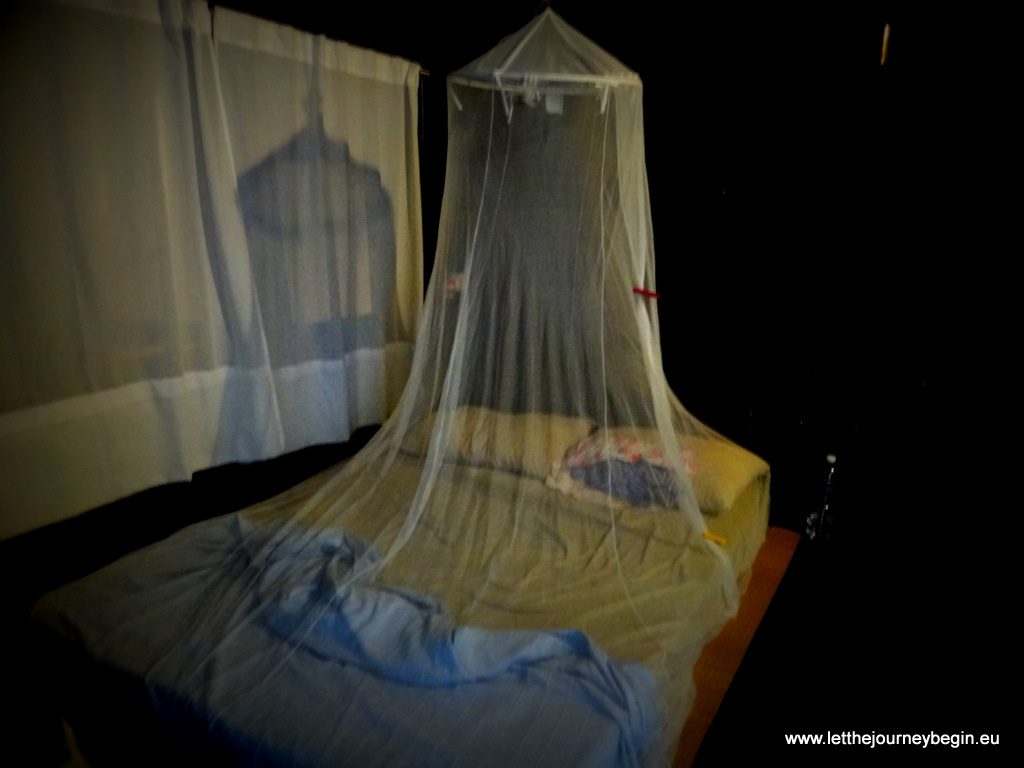