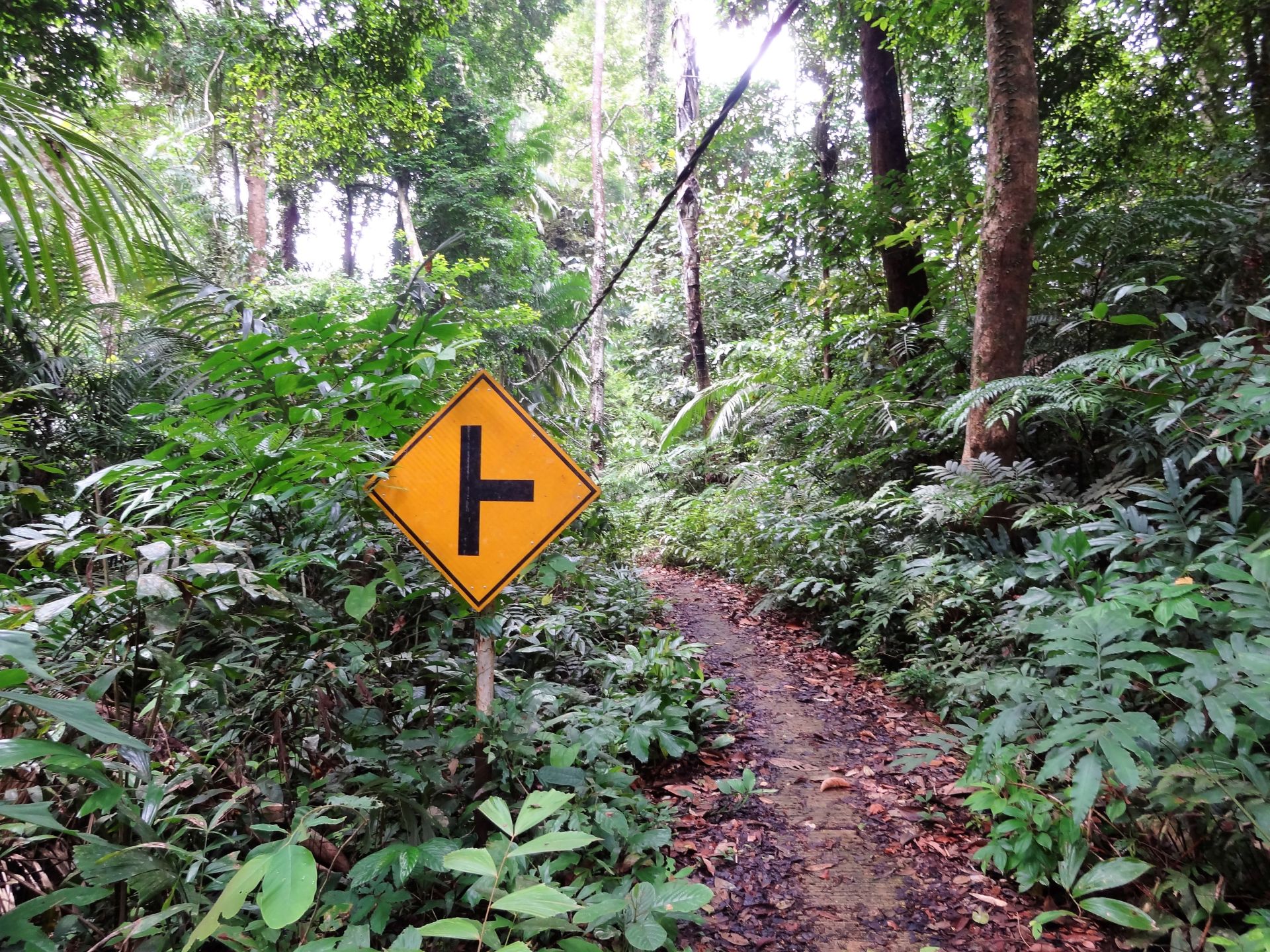 After two days of sleeping, eating and a whole lot of swimming we decided that it was high time for some exploration. The morning was a bit cloudy and misty – quite perfect for what we had in mind: a trek through the jungle to the other side of the Tioman Island.

The jungle path from the Tekek village on the West coast of the island to Juara village on the East is only seven kilometres. An easy walk? I wish. As you may remember from the previous post the middle of Tioman is hilly, meaning that we not only had to walk through the jungle but also spend half the route going uphill.

After a good breakfast we packed our backpack, picked up some water supplies and got on our way.

Our guidebook had one piece of advice: if in doubt about the path, follow the power cable!

It was a very valuable piece of advice, especially since the signs were few and hard to find…

The power-line principle wasn’t foolproof, however. A few fallen trees made us briefly wonder on where we are supposed to go next.

The first three or four kilometers of the trek were uphill paths, paved with concrete blocks in the steepest sections.

The heat and the rough terrain were beginning to feel more and more like being stuck in a tropical house of some ZOO. Of course, without the option of leaving when it gets too hot and humid. I don’t think I’ve ever sweated so much in my life. And, to make life more interesting, we ran out of water around the end of the first hour into our three hour trek.

The higher we went, the more water was around us – little streams and ponds gave some freshness to the air.

Up here they gather the water reserves for the island. We didn’t risk drinking the unpurified water and sadly we weren’t allowed to swim in it either (those signs, as opposed to others, were very well placed). So we had to settle for just cooling off our faces in some of the smaller streams on the way.

Once the steepest part of the trek was behind us, we felt considerably better – walking on the highest part of the hills with a little stream flowing next to the path even felt pleasant. A monkey family seemed to be appreciating this location as well.

Monkeys weren’t the only wildlife we met on the way – there were tropical butterflies, geckos, and (not to forget) swarms of mosquitoes. We also saw a red snake and some gigantic ants: the one in the picture below was at least three centimeters long.

And I almost forgot to mention the leech that had chosen my shoulder at some point during our jungle trek! Luckily Daniel noticed it before it had managed to get too much of my blood (and I am thankful that he immediately removed it instead of taking a picture of it first…)

Enjoying the wildlife and the slightly cooler air didn’t mean that we weren’t tired anymore, of course.

Suddenly, after almost two hours of going through the jungle, there was a road sign on our path.

We were initially a little confused but a few minutes later the meaning of the sign became clear: we had reached a road! There is a steep serpentine road (if connected concrete blocks can be called that) across the island. We didn’t choose it for out trek because its quite unsuitable for walking: too narrow, busy with cars and scooters, as well as longer and higher than the jungle path. It turned out, however, that this is the road we’ll have to take for the remaining three or so kilometers. So we followed the cat paw prints down the hill.

After around three hours of walking we had reached our goal: the most beautiful beach of the island!

Our first stop in Juara was buying some water, the second – going for a swim. And then another swim.

We stayed in the village for a few hours enjoying the picture perfect beach and getting some food in one of the local cafes.

Also here there was plenty of wildlife…

Despite the difficulties, we both agreed that doing the jungle trek was definitely worth it and that it was a great experience. But we were also very, very happy that we didn’t have to walk all the way back. The local cafe offered a taxi service (i.e., a big black four-wheel jeep) which got us back to our guest house comfortably and surprisingly cheaply.