Welcome the first instalment of the new “Bamm-Bamm Talks” series! After following my daughter’s language progress in the series “Birdy Talks“, I’m excited to be starting a new series about her brother.

I know, I know, one should not compare the kids. That said, most parents will probably agree that – willingly or unwillingly – making some comparisons is inescapable. And I believe that comparing by itself not a bad thing. As long as you avoid making contrasts of the ‘better – worse’ kind, it can help you to understand your children as individual personalities. Not good or bad, just different, with their own interests, strengths and weaknesses.

One of the reasons why I have chosen the age of 20 months as the starting point for the series, is that we have a feeling that Bamm-Bamm is one the verge of the so-called language explosion. He’s getting better at repeating words and sounds by the day and is adding more words to his vocabulary.

At this point, his babbling is so expressive both in tone and accompanying gestures that he could fool someone into believing that he’s actually speaking in full coherent sentences, just in a language that they don’t know. Bamm-Bamm also accurately hums melodies of various songs that he has picked up. He loves books and often brings them to us parents to read together. Interestingly, he even likes to read the same book with both me and his dad back-to-back as we say different words to the same pictures.

At the same time, he’s not particularly interested in demonstrating what he knows and understands. As opposed to Birdy who loved pointing out things in picture books per our request, Bamm-Bamm seldom feels inclined to point at images or answer silly questions like “what sound does the dog make?”. Just as it was with learning to clap his hands or waving goodbye, our son does things that interest him when they interest him, caring little for doing something just to please us, his parents.

From exclamations to words

As I have written previously, our son’s first words were “mama“, “tēte“, and “nee“, i.e. mom, dad, and no. From early on, these were accompanied by exclamations that increased in their expressiveness: uh-oh! Oops! Ta-da! Ku-kū! Tā! Aua! Wow! The latter would at times transform into “oh wow!” or “wow cool!” (no idea where he picked up the latter).

The words that our son has added to his vocabulary during the last months are a mixed bunch. To our hilarity, Bamm-Bamm calls lamp “papa” (dad in German), causing confused looks from German speakers when pointing at the ceiling and excitedly talking about papa (his sister did the same).

He’s also quite polite, saying “bitte bitte bitte” (‘please’ in German) when he wants something and “ludzu” (‘please’ in Latvian, also used as ‘here you go’) when giving us something. He knows for sure what “kaka” is (‘poo’ both in German & Latvian) and is happy to point out every “baby” he sees. His two favourite foods are “gur“, i.e. pickles (short of Latvian ‘gurķis’ – cucumber) and “kuka“, i.e. anything resembling cake and/or cookies (Latvian ‘kūka’, German ‘Kuchen’). The only body parts he currently cares about naming is the nose: “degu” (from Latvian ‘deguns’) and hand: “roka” (also from Latvian) when he wants me to give him my hand.

In Bamm-Bamm speak “gul” means bed or sleeping (accordingly ‘gulta’ and ‘guļ’ in Latvian), whereas “man” stands for mine (‘mans’ in Latvian, ‘mein’ in German). He’s also finally showing interest in learning animal sounds, the current favourites are barking and meowing.

Furthermore, our youngest tries to count to three in Latvian (“vie – ivi – tiiiii“) using it as ‘ready, steady, go!’. And just the other day he suddenly started saying his sister’s name quite coherently and perfectly mimics my intonation when I’m calling her.

Bamm-Bamm started combining words around the same age as his sister but with one major difference. While for her this ability appeared together with the language explosion and a considerably bigger vocabulary, our youngest is making use of what little he knows in other ways.

Generally, he sticks to single words unless he’s very excited or very frustrated about something. For example, one morning I was woken up by exasperated “nē guļ!” (no sleep!), while another we opened our eyes to cheerful “papa kuck mal!” (daddy, look!).

Just like with Birdy, Bamm-Bamm’s vocabulary is presently skewed towards Latvian. Yet, as the example of reading the same book with both parents back-to-back shows, our son has certainly realised that mommy and daddy don’t speak the same way. That said, he currently shows no signs of attempting to differentiate which word he uses with whom. Why would he if both parents clearly understand him either way?

To be fair, at the moment he only knows around three words in both languages: no (nē / nein), daddy (tēta / papa) and bye (tā / tschü). He uses them interchangeably as the mood strikes.

Stay tuned for the next update in a few months time! 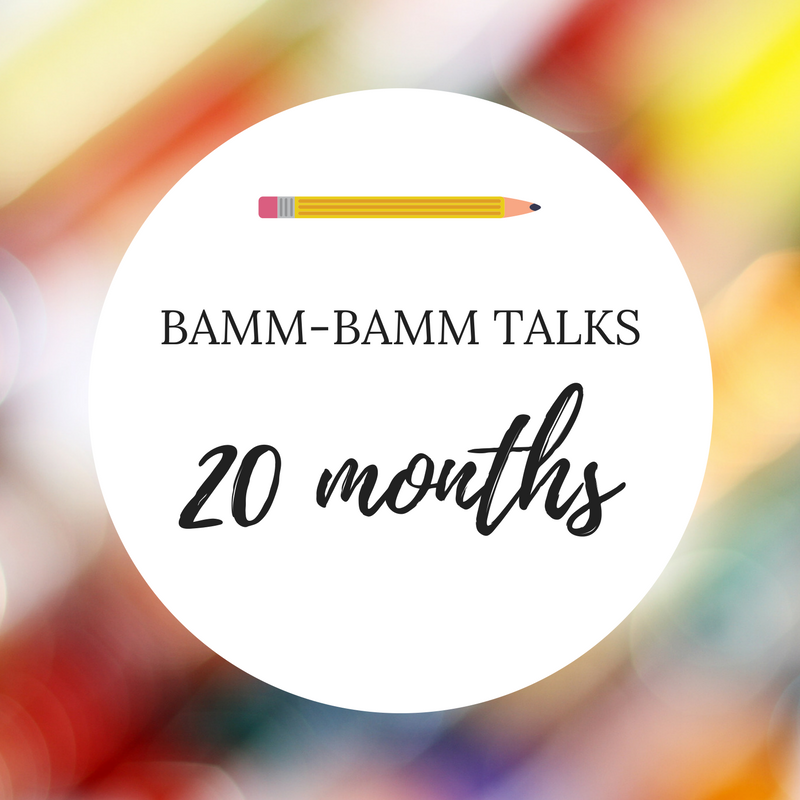 Check out also these posts about our family’s languages and the challenges along the way: